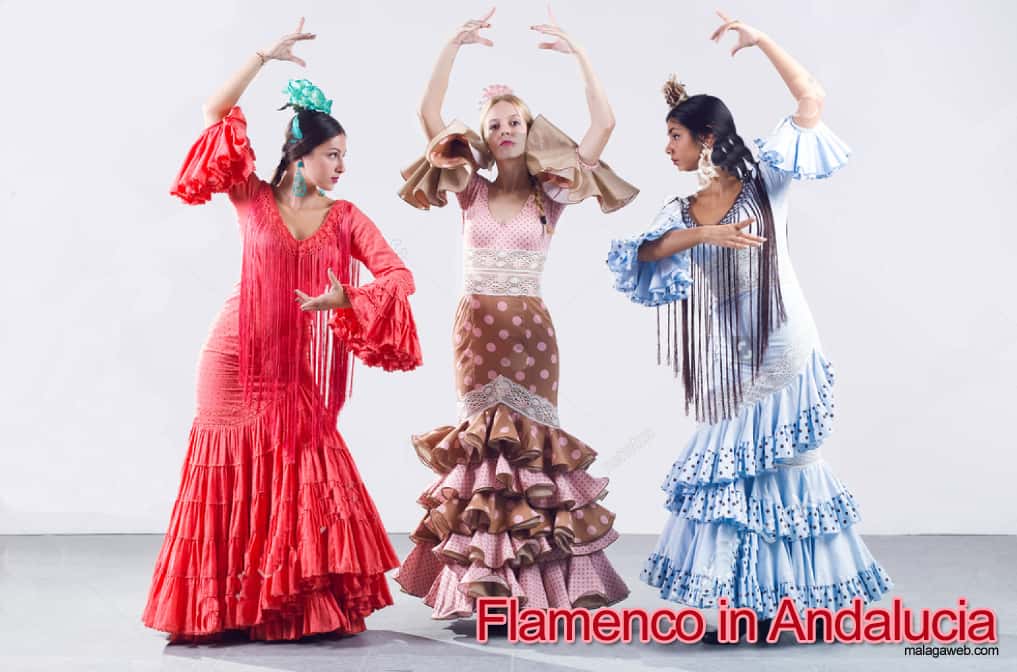 Are you wondering about the roots and home of Flamenco, Verdiales, the origin of the Andalusian folklore or where to enjoy a good performance in Malaga? We will learn a little about its history and roots and finally I will recommend events and places where you can enjoy a good show.

I advance you that is very interesting how the passage of the centuries has shaped current customs by taking elements from different civilizations.

Flamenco, declared Intangible Cultural Heritage of Humanity, has diffuse origins the further back we go.

Flamenco is a form of artistic expression through dance, music and singing. There are different forms of Flamenco that affect singing or dancing, with a type of lyrics and music that makes each one unique.

Flamenco is an exercise that brings physical and mental improvements; a dance in which feelings and emotions are expressed, we could say that it is a scenic artistic genre unlike Andalusian folklore.

Depending on several factors, including geographical area of origin, they may be referred to by different names, each with its own specific characteristics. Some of the most popular are the Andalusian copla, fandango, jota flamenca, malagueña, sevillana, tango or verdiales, although there are many more. Within each one there can also be different styles, the diversity becomes huge.

Those interested can learn Flamenco in many of the schools that offer classes for different styles.

Flamenco, declared Intangible Cultural Heritage of Humanity, has diffuse origins the further back we go. It seems clear that the gypsy ethnic group preserved and adapted it, although it was not their own creation but rather a transformation of Andalusian folklore.

Some erroneously attribute the origin of flamenco to the Moorish reign in Andalusia; its origin if we look for its roots is much older and can only be understood as a fusion of cultures throughout the centuries that has managed to get to our days. It is likely that it will even include influences from the Indian subcontinent, the original place of the Gypsy people.

What could at first have been a Greek, Roman or even Egyptian artistic expression has ended up branching out into the different folkloric expressions that can be found today in Andalusia. 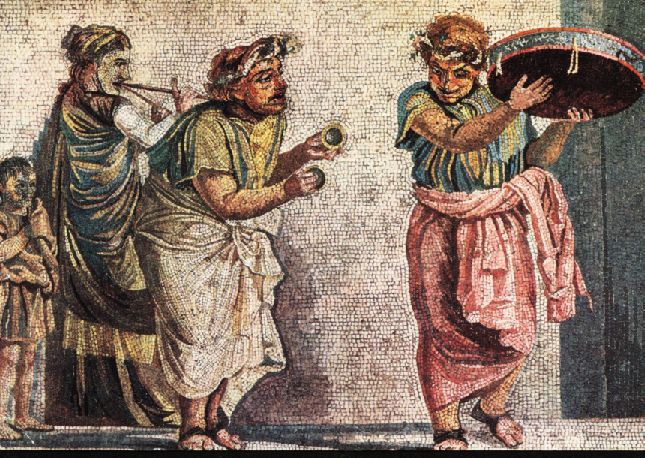 Searching for the roots

If we try to trace the roots of the Verdiales (typical Malaga dance), we go back to a remote past. From the mysterious Minoan civilization of Crete and its dances with flower hats in honour of fertility, to the Greek or Roman civilization and the description we find of its artistic manifestations, singing forms and musical instruments; there are many elements in common with the Malaga folklore of today.

Phoenicians, Greeks and Romans sowed the seed that would grow alongside the Iberian culture, with its dances and songs. From this seed, and after the passing of the centuries, Flamenco would sprout, the fruit of Andalusian folklore.

I leave for another time the history of Flamenco from the 18th century onwards and how it has evolved to the present day, if you are interested. I would like to point out that the Triana neighbourhood in Seville is historically considered one of the centres of Flamenco.

Folklore performances and events in Malaga

Many of the events throughout the year in Malaga or Andalusia usually include popular performances and dances.

Some ancient celebrations, although unknown, take place in rural farmhouses or hermitages and are highly recommended.

It is a festive day in the outskirts of Torremolinos, specifically in the Pinar de los Manantiales. The place is an extensive green area with numerous pine forests and a total of four springs, considered the lung of Torremolinos. It is a very popular recreational area, where many families enjoy barbecues in the shade of the trees and there are water fountains.

There is a tasting of typical dishes. It’s worth coming out and enjoying the local folklore outdoors with food and drink at popular prices!

Main Festival of the Verdiales

On the eve of the Santos Inocentes, on 28 December, the Verdiales festival takes place in the municipality of Puerto de la Torre. This is a contest with also children’s groups where everyone will participate wearing the typical costume.

Every year during the month of August this town of Malaga holds this Verdiales Festival, considered the oldest in the province.

During the event you can enjoy the typical gastronomy of the place; the celebration lasts until the early hours of the morning.

Spring celebration at the Verdiales Hermitage

This celebration is so unknown that it could almost be considered private, but it is open to the public. A few kilometres from the city you will find a religious pilgrimage that has all the elements to enjoy the music and the typical dances that used to take place when the work in the countryside ended with workers meeting in some farmhouse for dancing and having some fun.

This event takes place in the Verdiales Hermitage on the day of the Virgen de los Dolores. The Hermitage is a religious building from the early 18th century. It is on the old road that led from Malaga to Antequera.

Hundreds of people gather to celebrate spring on an open field day. You will find drinks and the typical gastronomy of the Mountains of Malaga at good prices.

Where to see Flamenco performances in Malaga?

In any area of the Costa del Sol you will find local restaurants or the so-called ‘tablaos flamencos’. In these places you can not only have dinner or a drink, but also enjoy live performances or even dance. On the other hand, many pubs oriented to adult audiences dedicate a section of their musical repertoire to Flamenco.

It is very typical of the booths at the fair in Malaga the Sevillanas and go to the fair in flamenco dress, something that even some tourists dare to, and you? 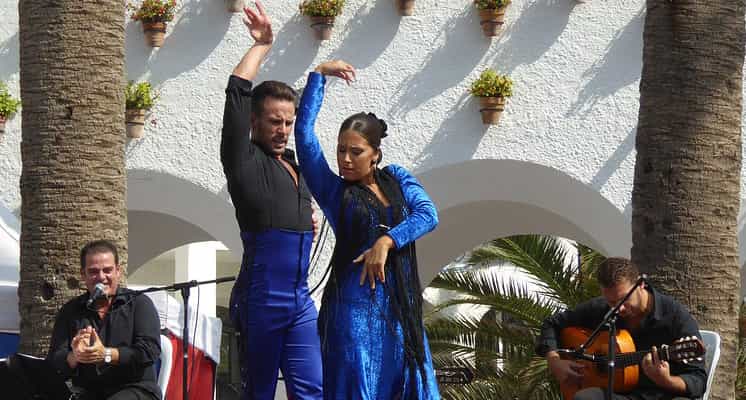 They have their space in the disco El Liceo from Monday to Sunday, with two sessions a day.

The tablao is located on the first floor and has a capacity for 80 people.

A centre that practices the technique of improvisation and has qualified teachers for beginners, guitar and flamenco dance courses.

A highly recommended place to learn about the history of flamenco in Malaga. You will find the typical Flamenco tavern, the guitar of El Piyayo (typical Malaga character) and a Flamenco tablao where shows are held.

This popular concert hall and discotheque in the centre of Malaga dedicates Wednesdays to flamenco fusion.

Flamenco show in Torremolinos on Tuesdays, Thursdays and Saturdays at 10 pm.

Flamenco shows every Saturday in Benalmadena. They also offer private or group classes and workshops.

Located in the old town of Marbella.

The Flamenco Tablao is located in a house in the old part of Marbella: It is very close to the previous one.

Great festive atmosphere in this place in Nerja where you can enjoy rumbas and flamenco pop where you can also enjoy food and drink at a good price.

If you are in the area I think it is a recommended option because of the good reviews.

I hope this guide will be useful if you visit Malaga and want to learn more about the Andalusian culture.

All you need to know about Flamenco, Verdiales and Andalusian folklore was last modified: January 30th, 2020 by Raúl G.T
Comparte este artículo: