Picturesquely situated in a bay surrounded by mountains and bounded by the rivers Guadalmedina and Guadalhorce, Malaga city with its two thousand-eight hundred years of history is one of the oldest cities in Europe. Walking by the old town is a experience you should not miss. 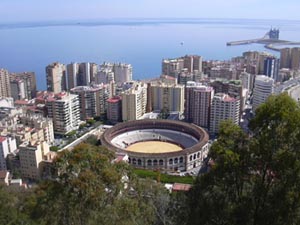 The city experienced the greatest civilizations of the Mediterranean, from the Phoenicians and the Greeks to the Romans, thanks to the strategic location of the port, an important site along the trade routes since ancient times.

This introduction is to say that Malaga is not only the capital of the Costa del Sol, a destination known throughout the world since the beginning of the tourist boom in this area, where the climate, the sea, beaches and golf courses represent an irresistible attraction for national and international tourists. If you plan to spend your holidays in Malaga or surroundings, dedicate at least one day to visit the city.

Guide and map is recommended for visiting the city

The centre of Malaga is a place where you can spend hours and return to visit without ever getting bored; there’s so much to see that it’s impossible to even enumerate. Malaga is rich in culture, modernity and historical monuments. It is recommended the use of a tourist guide or a monuments/street map for getting the most from your visit, check our resources page for maps and guides.

It’s a cosmopolitan city, capital of the Costa del Sol and with a history that dates back to the Phoenician times when it was founded, and later on passed onto the Romans and Arabs, who left us part of their culture and constructions. Malaga was finally conquered by the Catholic Kings in 1487, leaving us an incomplete cathedral due to the lack of funds back then, known as ‘La Manquita’.

Of its even further past we must mention several monuments to visit, highlighting the Alcazaba Arabic Castle and the Gibralfaro castle with beautiful gardens located by the coast.

Apart from the above mentioned, Malaga is the city of Pablo Picasso’s birthplace, and the square where he used to play as a child still exists today, as well as his house which is now a museum that we can visit during our stay in Malaga.

Malaga has the second biggest port in Spain, recently modernised and is now also a great place to spend a day’s shopping.

If we visit Malaga we cannot go without visiting the surrounding villages, like Torremolinos for example, a well-known and popular touristic town that had its boom in the 1960’s and where an endless number of movies were filmed. Visiting its villages we’ll discover more of Malaga, as well as enjoying a wide variety of services and attractions for the tourist: golf lessons, theatre, flamenco, restaurants, tapas bars, etc..

The infrastructure makes Malaga an ideal city to make it our starting point from where to start exploring Andalusia, with great access by road to Granada, Seville and Cordoba, that will make life easier if we decide to hire a car in Malaga, or if we travel in our own vehicle.

Malaga airport, also known as the Costa del Sol airport, is international and receives flights from USA, Asia and from almost all the European capitals.

Things to do in the old town

If you like football, you can watch a match between the Malaga F.C and another football team at the Rosaleda Stadium. The official website where you can see the league table and the latest news related to Malaga is malagacf.com (In english)

One of the most cultural events in Malaga is the Semana Santa (the holy week), where we’ll find as many devotees as we will tourists, with the streets absolutely packed with people until late at night; If, on the hand, you don’t feel like dealing with large crowds, then we recommend to stay as far away as possible from the centre of Malaga during the Semana Santa.

The Malaga Fair is another of the big events of the year in Malaga. It’s on for about a week as from the 15th of August and is divided into two areas: the centre of Malaga during the day, and the fairground on the outskirts of the city in the evenings till early hours of the morning, where you’ll find the rides and many stands of all kinds.

In the fairground we’ll find the traditional fair huts with a wide variety of music and in some of them we’ll be able to enjoy live flamenco shows and some delicious tapas.

There are quite a few photos of the Malaga Fair in our photo album. You can check them out by clicking on the previous link.

In Malaga there are so many things to do that it’s almost impossible to list them all, for those who enjoy history, nature, art or sport, or simply for those who enjoy a good meal. The following list here below is a brief enumeration of a few recommendations of what to do in Malaga:

Malaka, as it was known in the olden days, was occupied from remote times, proved by the remains found in Antequera, the paintings discovered in the Treasure Cave in Rincon de la Victoria, or the ceramics found in Nerja.

The Phoenicians were the founders of a commercial route from the century VIII b.C. using the natural port on the foothill of Gibralfaro as a port and taking advantage of the numerous silver and copper deposits.

We are developing the history of Malaga, keep checking out our blog for the latest updates.

Malaga, Andalusia’s main tourist destination, is located by the Mediterranean sea in the south of Spain. Limited to the east by the stretch of Gibraltar and to the west by Granada, surrounded by mountains that give a spectacular view of Sierra Nevada in contrast with the Malaga coast.

Use the controls to move around the map of Malaga or zoom in and out for a more general view. You can also change the type of view of the map, to either satellite or terrain.

Due to its demographic situation, the city of Malaga and its coasts have an exclusive microclimate in Andalusia, wrapped up by the Mediterranean, its temperatures are never as low as in the rest of Andalusia, and the temperature in summer is more fresh and humid than in the interior.

Below you can see a weather forecast for today:

Nightlife in the city centre

After the sun goes down, you can continue to enjoy what the city has to offer. From a quiet tapas bar to a raving club to dance all night. The city has many discos to choose from. We are sure you will take many memorable moments back home with you.

The nightlife in Malaga mainly takes place in various areas and with reasonable prices compared to Puerto Banus, Puerto Marina or other places along the coast. The price of a drink in Malaga depends on the place you choose, ranging from 3.50 euros up to 6 euros in the more excusive places.

Here below we analyse the main places to blend in and experience the Malaga night:

Hotels and apartments in the centre of Malaga

Here below we have listed a few of the most demanded hotels in Malaga:

There is also a great variety of comfortable hotels in Malaga, like the Hotel Vincci.

You’ll be able to find 5-star hotels in Malaga as well as plenty of hotel offers if you are looking to save money during your stay. Malaga has a lot to offer and we hope you enjoy your stay with all our tips.

Discover in the video below the crowded Larios street, one of the most famous streets in Malaga.

The beaches of Malaga city have a length of about 15 km; From East to West we can find the beaches of El Candado, Las Acacias, Baños del Carmen, La Malagueta, San Andres, Mercy, and Guadalhorce Guadalmar. The connection between the promenade of Antonio Machado and the western part of the Costa del Sol is currently under development.

Here's a brief summary of the most popular beaches in Malaga:

Beaches of Malaga have many blue flags awarded by the European Union, which guarantees the quality of the sand and water that can be found. If you want the link below you can learn more about the beaches on the Costa del Sol

The city of Malaga is the neural center of the Costa del Sol and worth the visit. Although most tourists tend to choose the coast as a place to stay for their vacation, the city of Malaga has a great infrastructure developed for tourism.

Parking can be problematic in Malaga city centre. Spaces are scarce and it isn't very clear which areas are permitted for parking and at what times. If you are going to park downtown be wary of parking lot attendants asking for tips - most are not official and won't actually watch over your car. Your best bet is to ignore them, pretending you don't understand.

Visiting Malaga in September – All you need to know