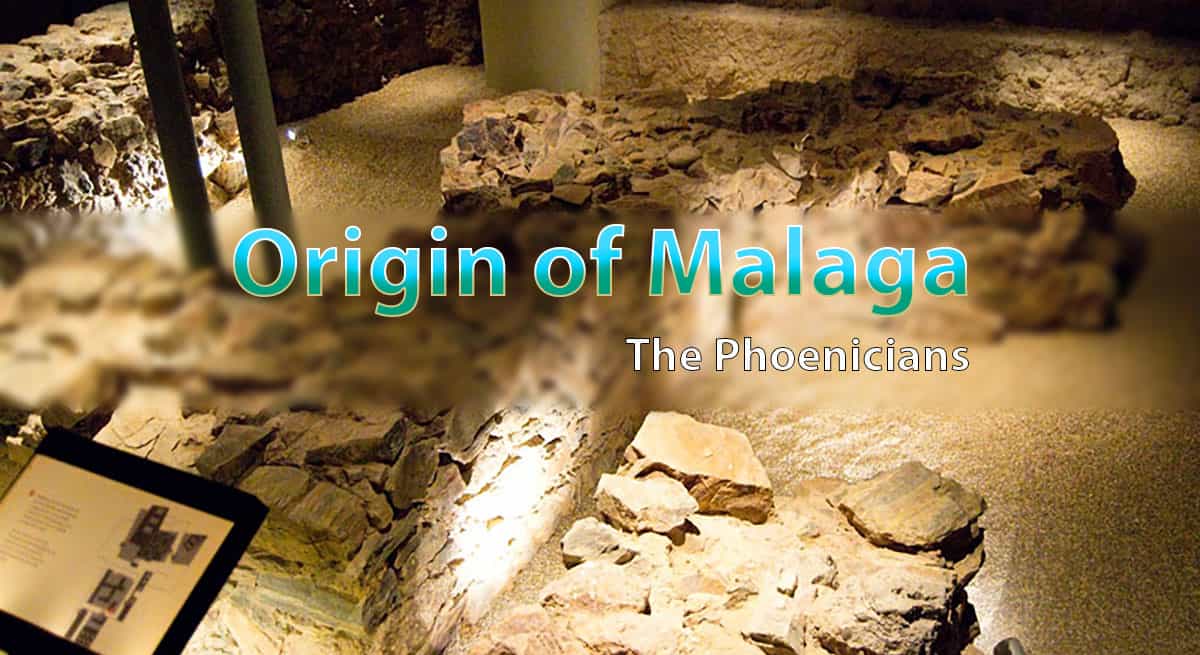 Reading is an activity that relaxes us and is ideal to do when staying at home. For this reason I am going to write today an article on history and discovery; perhaps some of you will find it interesting to learn about the Phoenicians; a people who had a lot of influence on the history and origin of Malaga.

We are going to know the history of Malaga, one of the oldest cities in Europe. This history begins with the Phoenician colonies along the entire coast of Andalusia.

Its history as a leading commercial centre in the Mediterranean would begin from the 6th century BC; although the colony seems to have been founded a few centuries earlier.

We cannot forget the first agricultural towns of our province, creators among other monuments of the Dolmens of Antequera. But in this article we are going to deal with the origin of Malaga, which begins with its growth and the beginning of the commercial routes.

Phoenicians and the origin of Malaga

The Phoenician civilization came from what is now the area of Lebanon and Syria, next to the Mediterranean Sea. They under the lack of fertile soil on their territories, oriented their activities to the sea. With time this experience was perfected, making them being able to sail great distances.

The origins of the Phoenicians are in Canaan, and include the union of very different cultures in the area of Western Asia since the Neolithic period.

The alphabet, which was adapted by the Greek people, is attributed to the Phoenicians and became the point of origin of later western alphabets.

They left an important cultural legacy throughout the Mediterranean, in which they were the great traders in the ancient world. As time went by, these trade routes led to settlements, where they not only supplied themselves with raw materials but also processed them.

They have not left many remains of their presence, which is why those we can find in Malaga and all of Andalusia are so important.

Malaka and its history

One of those settlements was Malaka, where they established a factory. Before their arrival in the area there would have been a Bastetani settlement, who were originally from the peninsula.

The factory at that time was dedicated to the salting of fish and the production of purple dye. Malaka quickly became a prosperous place with its own currency.

According to historians and archaeologists, the ancient Phoenician settlement was originally located at the foot of the hillside of Gibralfaro. Its natural bay offered a good harbour for their boats.

The remains found of ceramics from other Greek cities indicate the commercial importance of this settlement.

The city prospered even after the arrival of the Romans to the peninsula during 237 BC; it was granted autonomy from the empire since they presented no opposition, being able to keep their traditions and culture.

Over the centuries the city would become Romanised until it became a municipality. It would incorporate Roman constructions such as the theatre from the first century before our era, or an extension of the port. From the first Roman occupation some Roman baths have been found under the Roman Theater.

Of this first city wall from the 4th and 3rd centuries BC, there are still remains in the basements of some buildings in the historic centre:

Only the section that we will find in the Picasso Museum has a height of 4 meters, the rest of them are just the foundations.

You can see more pictures and find information on the museum page:
https://www.museopicassomalaga.org/en/architecture

Cerro del Villar and its history

At the mouth of the Guadalhorce River is another important Phoenician city in Malaga. It was discovered in the 60s of the 20th century although it was not until 20 years later that excavation work began and became part of the history of Malaga. 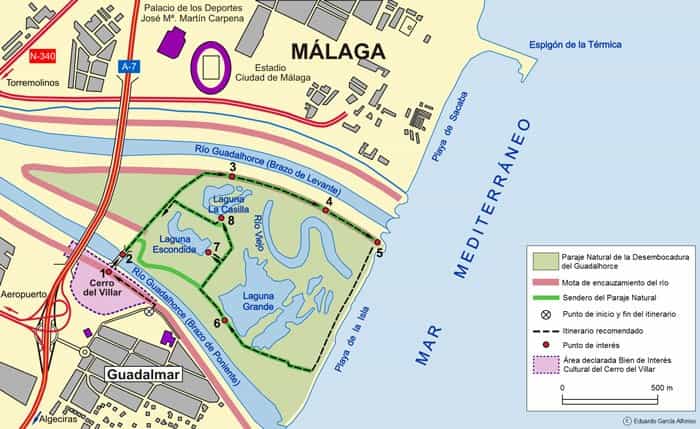 The city would have been on an island located in the middle of the mouth of the river and is estimated to have originated around the 9th century, being abandoned around the 5th century BC. 400 years of life that were probably swallowed by the water; floods caused by a tidal wave that swept the city as the remains found indicate.

This city on the Guadalhorce had a port and large buildings and perhaps even a wall.

It is not known if Malaka was founded as a result of the abandonment of the city of Cerro del Villar; or if they grew in parallel and Malaka ended up absorbing those who lived here. My intuition tells me that this was earlier to Malaka, but there is no evidence. 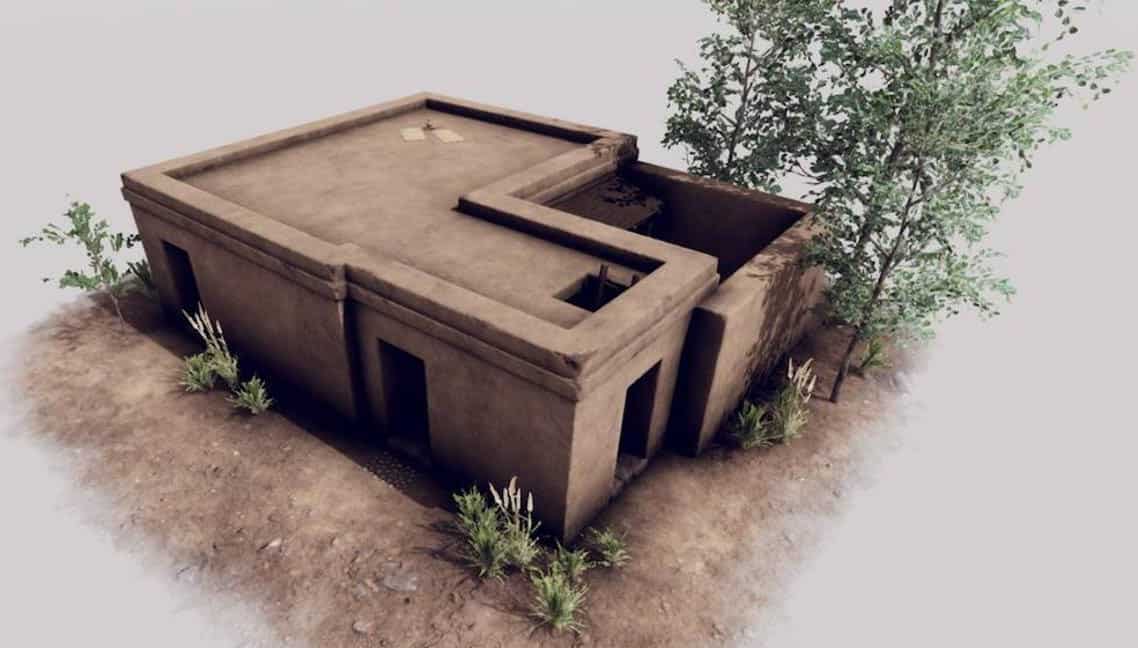 Visiting the mouth of Guadalhorce

The University of Malaga allows through new technologies the virtual visit to how would be the pier of the Cerro del Villar. You will be able to see not only how they lived but also what they ate and what the environment was like for the Phoenicians in Malaga.

The mouth of the Guadalhorce, where these remains are found, is also a natural spot. There is a signposted trail that invites you to take a walk, discovering the flora and fauna of the place.

To get there you can follow the indications of this map: https://goo.gl/maps/BsBDBz2JMwRYv35ZA

This site is an important reference point in the study of Phoenician civilization at the international level. This area of Velez Malaga had settlements since the 8th century BC approximately.

During its best period it seems that the three settlements were protected by the same wall. 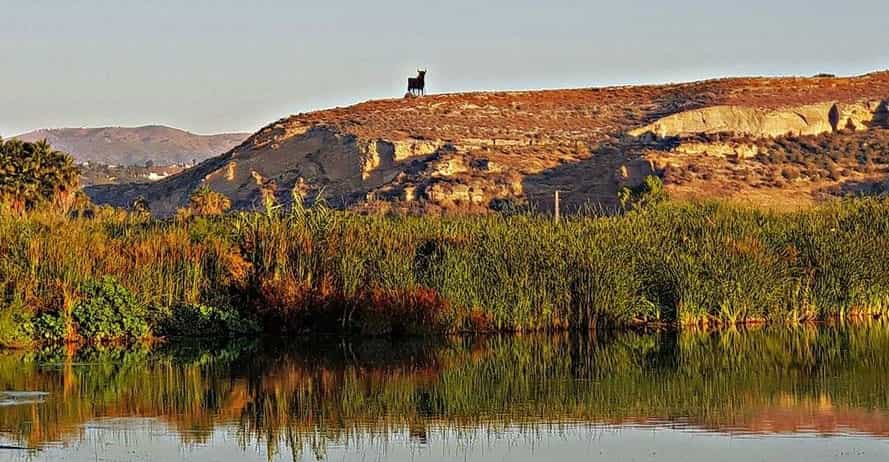 Although the River Vélez now has the Viñuela dam that contains its waters, you can still observe a varied flora and fauna that develops next to some flooding.

To get there you can consult the following map: https://goo.gl/maps/JBukv6WMsSG7r9BG6

These remains date back to the 7th century before our era and have left us traces of what urban buildings were like at the time.

Its population is estimated to be around 1500 inhabitants. Its economy was based on fishing, agriculture and livestock, although it also seems that they developed purple dye for trade.

This place was occupied again by the Roman civilization until the third century of our era.

It is located next to the mouth of the river in its western part.

Although today this settlement is almost 1 kilometer from the coast on the right bank of the river, in Phoenician times the sea would surely surround the base of the rock.

It was possibly an expansion area of the previously mentioned settlement of Toscanos.

The area provided limestone that was widely used from then until relatively recently. It had an area dedicated to housing and another to the factory, with smelting furnaces.

After its abandonment it was recovered during the Middle Ages in the 10th century.

Located on the right bank of the river, it is next to where the old mouth of the river would have been. There are still some remains of the ancient wall that make us dream about the ancient history of Malaga.

Not many remains have been found on Cerro Alarcón, possibly because this settlement was active for just around a century.

This site is located on a small elevation on the eastern side of the river, in a bay that does not exist today.

After the Phoenician settlement there was a Roman occupation.

About 300 metres from the Toscanos site is the Necropolis of El Jardín, one of the largest in Europe.

In this necropolis you will surely find some of the last inhabitants of Toscanos site, but mainly they correspond to the Cerro del Mar. It has simple tombs and some more complex ones.

Its location on the map places it somewhat away from the mouth and from the Phoenician settlements: https://goo.gl/maps/vyGK3n6NLaMdjWiw6

As an introduction, the Phoenician gods vary from one city to another, although some would be present in all of them due to their importance. Their religion had Egyptian, Libyan and Mesopotamian influences.

In the history of Malaga, coins and other remains indicate the city’s worship of the Goddess Noctiluca, or as she is also known, Malac.

It seems that the Goddess was carried in procession and immersed in the waters of the sea, hoping to increase the fishing. We can find a clear similarity with the procession of the Virgen del Carmen, which takes place every year in mid-July; a tourist attraction that you should not miss.

A poet from the 4th century situated in front of what today is Cala del Moral, a small island that was dedicated to the worship of this Goddess. Nowadays this island is actually part of the coast, due to the mouth of the river Totalán and the deposits accumulated over time.

Other Phoenician traditions that have influenced us

The Phoenicians were known for their wine, so it is not surprising that they introduced vine varieties that are today native to our land. Who knows if without their presence it would have been possible for our most famous wine Pedro Ximénez, to come into existence.

The Phoenicians were the inventors of the alphabet, which would later be adopted and modified by the Greeks.

As a curiosity, the Phoenician people were not belligerent. They settled mainly in areas where the local population did not present a threat.

Greeks in the history of Malaga

It is known from classical texts of a Greek colony called Mainake, although its location remains unknown in the history of the city. Some think it would be in present-day Málaga; others believe that the Phoenician presence is proof that Mainake must have been located somewhere else; possibly between Malaka (Málaga) and Sexi (Almuñecar).

Although there are enough proofs of trade with Greece at that time, Phoenician settlements could be found, but no Greek ones.

The Tomb of the Warrior

This is the name given to a burial site which was found outside the old city walls. It’s a 40 years old man who had signs of traumas, one of them on his head; although he managed to heal. 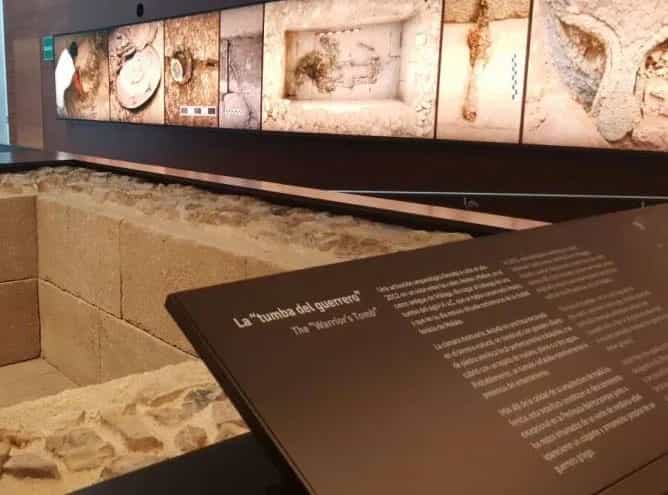 It is known that he lived during the sixth century before our era. He was possibly a Greek merchant or mercenary who arrived in the Phoenician city of Malaga.

The Tomb of the Warrior is a funeral trousseau currently on display in the Museum of Malaga, you can consult the link or the following map: https://goo.gl/maps/UJwDivfLjBZ8teWm6

The history of Malaga continues

After the Phoenicians came the presence and influence of the Roman Empire in Malaga, then the Germans, Byzantines and Arabs. A history as rich as it is interesting that contributed to the origin and history of Malaga, which has left us traditions and culture as well as archaeological remains and monuments throughout our territory.

We encourage you to follow us to continue unravelling all the secrets of Malaga, there is much to know.

History and Origin of Malaga – The Phoenicians and their period in Malaka was last modified: August 20th, 2020 by Raúl G.T
Comparte este artículo: