For your planning when you can visit our province, I’m going to tell you about some of the places with more history in Malaga that have been completely excavated in the rock. Don’t miss them, because some of these ancient monuments in Malaga may not appear in the most popular guides.

I will also show you how to get there by car and where you can park, all the facilities so that you do not miss these wonderful spots in our province. It would be a good idea to rent a car in Malaga, if you want to get the most from your visit.

The more people visiting those monuments, the sooner they will become aware of the importance of keeping them in good condition. Let’s contribute to their conservation!

This is one of those examples of places with history, and so much of it.  It’s an archaeological site that dates back very far in time.

The complex has a series of cavities for the quarrymen to rest during the week. In 1728 there was 10 people working, but during the peak it was around 100.

There is also a chapel that was built in 1739 and was used so that the workers did not have to travel to attend mass.

As a curious note, in 1735 there was a Moorish attack on this complex, during which they stole everything they found in their path. This is perhaps the reason behind the construction of the retaining wall.

They think that the quarry in Valle Niza is not well maintained. As a personal note I imagine it is because of the lack of publicity of the place and as it is not popular they do not invest the necessary time in maintaining it. Why don’t we show them that we are interested in visiting this historical place?

To visit it you must make an appointment with the Town Hall at the following number: 952 55 86 40

How to get there?

There was once a train station on this place which my father used to visit my great-grandmother; she lived close in a farmhouse built (or rebuilt) by my great-great-grandfather. Today there is no such train line unfortunately, so the best option is by bus or in your own vehicle.

The area is accessible from the coast road. You can follow the indications of the following map: https://goo.gl/maps/uhSZxTNuedhpd7nJ6

Malaka (actual Malaga) was an important Phoenician colony during the eighth century before our era. It was a focus of trade in the Mediterranean and as such has left us numerous archaeological remains that tell us about its past. 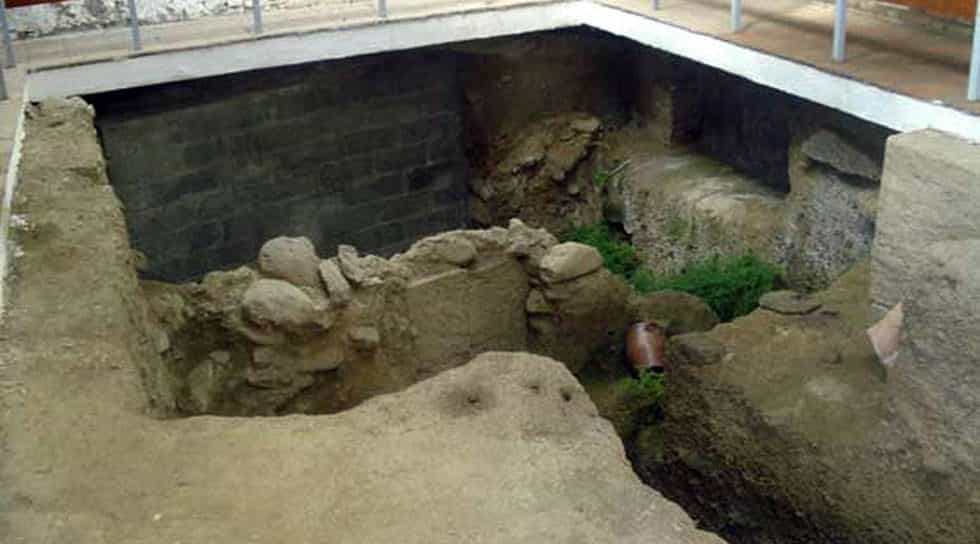 The Necropolis of Trayamar is located in the municipality of Algarrobo and is one of the most important in the western Mediterranean. The archaeological remains from this site are displayed at the Archaeological Museum in Malaga.

Inside you can see a scale reproduction of what this monument would look like in the past.

Visitors highlight the importance of this site for the study of Phoenician civilisation, although they complain that it is not open to the public and that visitors have to make an appointment.

It is located on a hiking route that goes from Villanueva de la Concepción to Antequera.

I guess that if many people visit these ruins they would make it more accessible. Why not contributing to the history of Malaga by visiting this place?

To visit this necropolis you must make an appointment, you can get information at the Town Hall of Algarrobo: 952552430

How to get there?

On the A-7 motorway, take the Algarrobo Costa exit and continue straight on. A little before you get there, you will see an open area on the right where you can park your car.

In Ronda we find this monastic complex excavated in the rock and dating back to the 9th and 10th centuries of our era. It was inhabited by about 10 religious people and consists of a place of worship, living quarters and a food storage area.

It was used until approximately the 18th century, after which it was abandoned until the 1980s, when it recovered its religious use.

The crypt of the complex is of a later construction, possibly from the 17th-18th centuries.

The Virgen de la Cabeza is venerated on its altar, the reason why the Pilgrimage takes place every June.

The truth is that they have very good opinions and they highlight the work that the Brotherhood of La Cabeza carries out in its conservation without receiving any type of public aid. They recommend the visit to know this monument of the Middle Ages in Ronda and get into how the religious life of the Mozarabs was.

Not infrequently I have passed in front of the ruins of the Basilica del Bobastro, which is next to one of the main roads that connect Ronda with El Chorro and Malaga. It was discovered in 1869 although it was not excavated until 1927, within its walls it guards a fascinating history. 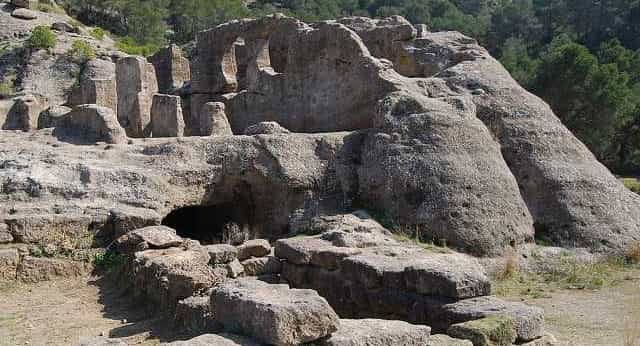 The story is about a famous Andalusian military strategist who after converting to Christianity starts to build this imposing monument out of the rock. This strategist, of Visigothic origin, is none other than Omar ibn Hasún, who was unhappy with the Arab aristocracy; this one of the reasons behind the rebellion that lasted 50 years, one which his sons would continue after his death.

The construction seems to have taken place over the 17 years that passed since Omar converted to Christianity and his final defeat; but unfortunately they were not able to finish this work.

The carving of this building on a single rock makes it an indestructible building; a buildint to last over time. But how would be Andalucia toda if Omar won the war? We will never know.

It is said that he and one of his sons were buried under the monument.

They value the natural surroundings of the ruins and the cultural interest of this archaeological site. Ideal for lovers of history and archaeology.

How to get there by car

Go to Ardales and then you will have to border the Guadalhorce Reservoir on its eastern side. You can consult the map and more images in the following link: https://goo.gl/maps/KnrqvB2TaycwtECe7

In Villanueva de Algaidas is the Franciscan Convent of the mid-sixteenth century. Next to it you can visit two cave churches from the 9th century, used by the Mozarabs during the Muslim domination.

You can still see the remains of the paintings that covered some of the walls. The building has suffered great deterioration with its abandonment after the civil war.

This place is also part of the GR-7 hiking route. You can visit the official website at http://www.villanuevadealgaidas.es/6637/ermitas-rupestres-mozarabes

Those who visit it find amazing the chapel excavated in the rock. No doubt an ideal visit for those who want to enjoy nature and this beautiful place.

You can take the motorway towards Lucena and take the exit to Cuevas Bajas, from there it will be easy to get to Villanueva de Algaidas. Don’t forget to enjoy the hospitality of the village and its rich gastronomy.

You can see the route and more photos here: https://goo.gl/maps/h1ufskn1y91Bscws7

In Ardales and where the ancient Mozarabic city of Bobastro was located, this cave church. In front of the chapel there is a Mozarabic necropolis excavated in stone. 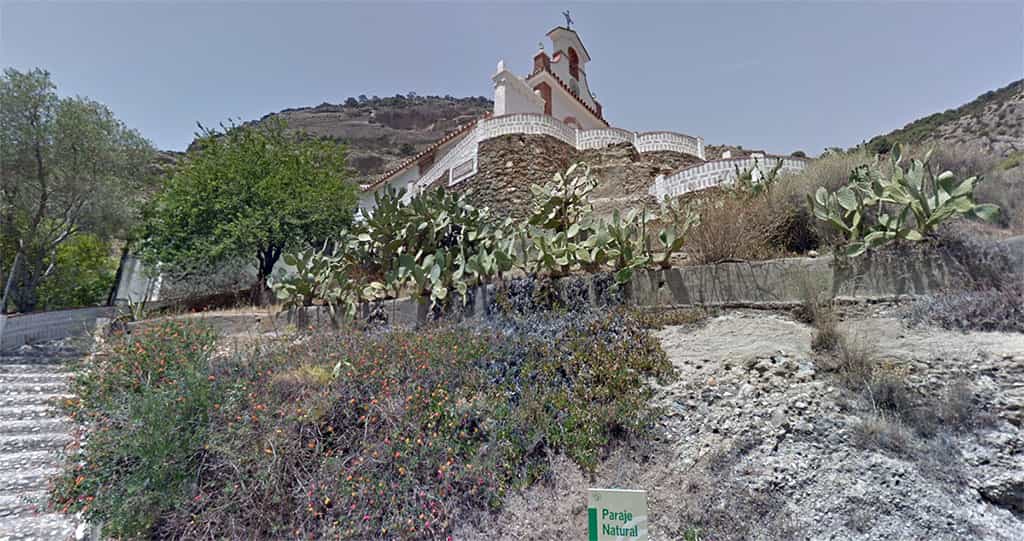 The hermitage may have been a church located outside the area of influence of the Bobastro Basilica, as it is very close to these ruins.

You can read more information on the website of the town hall: https://www.malaga.es/en/turismo/patrimonio/lis_cd-5378/

Visitors point out the impressive views from this place. They also point out that next to the Hermitage there is a place where you can eat typical dishes and stay.

To get there you have to take the direction of Ardales and border the Guadalhorce Reservoir on its eastern side or from El Chorro.

You can consult its exact situation or more photos in : https://goo.gl/maps/UfNeoM5BDdC3hia48

The Arabian Stairs are a series of granite steps and one of the best known ascents of Mount Huma , since it allows you to shorten much of the route.

It is especially suitable for nature lovers who want to enjoy impressive views.

Opinions of those who visit it

The visits are usually from people looking to practice climbing or to ascend Mount Huma. The views from this place are impressive and indicate that it is an outstanding place for climbing or hiking lovers.

You can check the following map for its location and other photos at: https://goo.gl/maps/PFi1VRaapXCN7nGQA

Fountain of the 100 Spouts

Although it actually has 101, they call this place “Fuente de los 100 Caños” or Fountain of the 100 Spouts.  Located in the area of Villanueva del Trabuco, this fountain is very popular.

Its water comes from the San Jorge mountain range. In addition to being a spring, it is the source of one of the main outbreaks of the River Guadalhorce, whose source is located a short distance from this place.

This can be the beginning of a beautiful hiking route; within pine forests and typically Mediterranean nature.

The construction of the fountain is recent, from the end of the 20th century. It has been declared a national monument and is one of the main tourist attractions of Villanueva del Trabuco.

They recommend going after the rainy season to see it in all its glory. The water is drinkable, so you can bring some empty bottles to fill it up.

Upon arrival you will find a parking area and picnic tables. You can see the situation on the map and how to get here: https://goo.gl/maps/JryX3VxKaLsYABmq5

Here I include other monuments that you can’t miss. As we have a dedicated section on our website, so I won’t go into them too much detail.

Follow the links if you want to know more about them.

Visit the Dolmens of Antequera

The King’s Path is originally made of stone and attached to the wall of a large cliff. In our section of this monument you can see how it used to be and photos of the construction process.

Today it has been restored and is more of a hanging walk. You can still see the remains of that ancient road that has been walked so many times throughout history. We have an article dedicated to the Caminito del Rey that may be of interest to you if you want to visit it.

More than 10 great stone monuments excavated in the rock in Malaga was last modified: May 3rd, 2022 by Raúl G.T
Comparte este artículo: