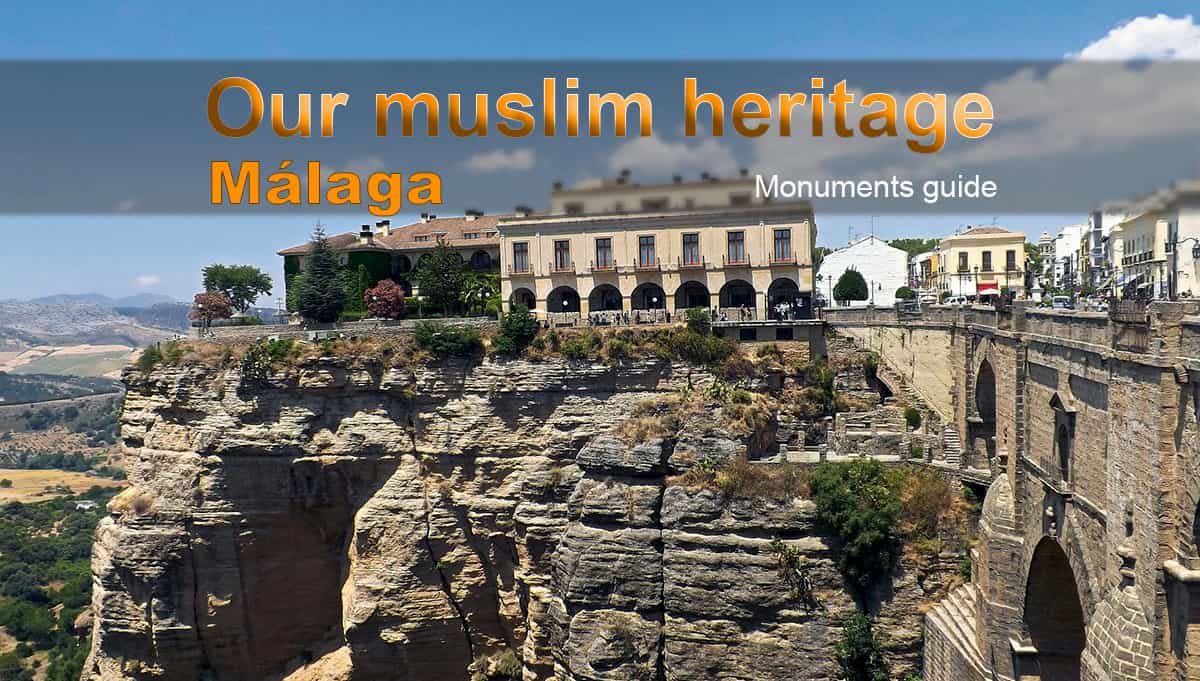 Many civilisations have been in Malaga leaving part of their culture and monuments; We have already seen how the Phoenicians were involved in the origin of Malaga; later how the Romans settled and brought with them a boom in the economy.

The Arabs managed to occupy Andalusia for a long period, specifically from 711 to 1492. A land that was not going through its best period since the fall of the Roman Empire.

During the Arabic period, some cities such as Malaga, Seville, Granada and Almeria experienced significant economic growth.

History of the Conquest: The capture of Malaga

The so-called Toma de Málaga took place at the beginning of the 8th century. Historians do not agree whether it was during 711 or 713; in any case the Muslim army managed to take control of the city from the Visigoths, an empire that was in decline.

The invading army was made up of disgruntled Jews, Berbers, slaves and Visigoths who had decided to change sides.

After the quick entry of the Muslims into the peninsula, part of the former inhabitants of the city took refuge in the Malaga Mountains; although eventually the population adapted to the change. This would be a historic moment that would bring a growth totally different from the rest of Europe and which has managed to influence our culture, streets and villages up to the present day.

During the 9th century Malaga was considered one of the best cities in all of Al-Andalus, according to chroniclers and travellers of the time.

You can read more about the Toma de Málaga in Spanish at the following link: http://www.gibralfaro.uma.es/historia/pag_1595.htm

The 8 long centuries of Muslim presence left us an important cultural legacy. From food dishes with clear Arab influences, to the layout of the streets, villages and important monuments that can be visited, to somehow revive that past from which our land borrows.

There are so many monuments that it is impossible to list them all, so I will try to offer the reader a good selection that I will expand on over time.

This famous historical figure was an Andalusian guerrilla, born in Parauta in the year 850 (Malaga) and of Spanish-Gothic origin. His origin comes from the ancient Gothic aristocracy who ended up converting to Islam.

His story begins with the murder of the man who stole his grandfather’s cattle, after which he had to hide in the Gaitanes Gorge; exactly in what today are the ruins of a castle carved into the ground, the Bobastro.

From then on, he dedicated his life to robbery until he was captured by the then governor of Malaga, who, unaware of his actions, only whipped him. He managed to escape to North Africa, only to return in 880, taking advantage of the chaos that ruled at the time.

From the Bobastro, he began to form a rebel group against the Muslim aristocracy. It achieved numerous victories and came to dominate the provinces of Malaga and Granada.

Omar ibn Hafsun eventually converted to Christianity. He used to present himself as a Gothic descendant and ended up creating a church on the ruins of the Bobastro; this would take its toll on him and reduce supporters in the rebellion. The battles were constant until his death in 918, after which his children would succeed him.

His final defeat came in 929. His body was eventually crucified along with two of his sons in the Bobastro place.

You can read more about the Bobastro Church and other monuments excavated in rock in another article.

Alcazaba of Malaga, a muslim fortress

This important architectural work located on Mount Gibralfaro, is an Islamic fortification with easy access from the city centre. It was built on the Phoenician remains of an ancient fortification.

Of this construction on the hill, the beauty of its gardens and buildings stands out, a special mention for the views of Malaga that can be had from it. This fortress was used throughout the centuries by the high nobility as a place of refuge or palatial residence.

This fortification was never defeated, but its inhabitants finally succumbed to hunger and thirst after a long siege. It remained in good condition until the middle of the 17th century, but successive wars and earthquakes eventually damaged it.

Nowadays it is in perfect condition and is one of the recommended visits in Malaga.

As a curiosity, the interior of the building housed a lower class neighbourhood at the beginning of the 20th century, which has left us with the occasional mystery story about Málaga by its former neighbours.

Find out more about the Alcazaba of Malaga on our website or find out how to get there on the following map: https://goo.gl/maps/rDQxKZy1UABunTCT7

Ronda was an important site in the defense of the kingdom against Christian attacks, so we will find many monuments that have managed to survive the test of time. Would you like to know them?

The Arab baths had two functions in the Muslim era, as a religious ritual and as a social facility. It was common to find them at the entrances to cities; in this case we can find the baths near the now disappeared Puerta del Puente.

The Arab bath or Hammam was deeply rooted in oriental social life, blending spirituality, health, social life, relaxation, pleasure and refinement of the Nazari aesthetic and led to a kind of unique facilities in the world and that disappeared in 1492 with the “Order of the Alhambra.”

Until 1998, with the opening of the Hammam in Granada, did not open its doors a Hammam in the Peninsula. In recent years there is a resurgence of this refined and pleasant culture.

The Arab Baths of Ronda were built during the 13th century.

You can see another photo at the following link: https://es.wikipedia.org/wiki/Archivo:Arab_baths.jpg

Visitors highlight the video in which they explain what life was like at that time. It is worth the visit and you will be able to take good pictures of the area.

House of the Moorish King in Ronda

In the Old Town of Ronda we find the House of the Moorish King, a construction from the 14th century and one of the most emblematic places of the municipality.

It has the Water Mine, a strategic resource that was used to supply water during the sieges. Due to the lack of space, animals could not be introduced, so it was the captured slaves who were in charge of turning it and raising the water. It provided water to the population garrisoned behind the city walls. It was of such importance that it was the target of the attack by the Marquis of Cadiz during the conquest of the city in 1485; after cutting off the water supply the city was unable to resist the siege.

The house had several owners since the middle of the 18th century and has undergone reforms.

The garden is later than the Muslim period; in 1911 the owner bought the surrounding houses to demolish them, build it and reform the house.

Located in the south of the city is this gateway that served as accommodation for the guard. In front of this location the troop of the Marquis of Cadiz met on 20 May 1485, putting an end to Muslim rule in the city.

The gate was located near the old Muslim cemetery and was the main access point to the city.

The Almocabar Gate was restored in 1961 and can be visited at the following location: https://goo.gl/maps/9VGsrVPCrhNtVDwa9

The purpose of this wall was to extend the natural defence of the Tajo River. It managed to survive until the French invasion in 1810, after which it had to be rebuilt.

The wall has two access gates, the Puerta del Viento (Wind Gate) and the Puerta de los Molinos (Mills Gate); the workers who went to the mills and oil mills passed through the latter every day.

You can get there by car along the road to the mills, although it is not recommended for low vehicles. It is an ideal place for hiking and discovering wonderful views of the surroundings as well as the remains of old buildings in fairly good condition.

You can visit the remains at the following location: https://goo.gl/maps/VEXV9k6SFrcZ9PhR8

Of Muslim origin, this tower was used as a defensive element by both the Muslims and the Catholics themselves after the conquest of the territory.

This tower was intended to defend Marbella of a possible invasion from the north; It would also serve as a place of refuge for the inhabitants of the municipality in case of an attack.

The date of construction is not known, but it was later renovated by the Catholics.

Arab influence in Malaga and its gastronomy

The Arabic influence is not only seen in many of the Spanish words but also in the gastronomy itself. If you want to know our past, besides visiting monuments you can do it through our gastronomy.

The Visigothic cuisine was of Roman influence, after the arrival of the Muslims it was enriched with new ingredients and recipes that have continued to this day.

Buñuelos, the famous pestiños, roscos or even the tasty churros so typical of Andalusia are a reminder of our past; a gastronomic legacy that has reached our days and that you can enjoy anywhere in our geography.

Watermelon, melon, pomegranate, quince, apricot and fig did not exist in our land before the conquest at the beginning of the 8th century.

The seasoning of our dishes also has a marked Moorish influence. From basil to saffron, without forgetting the cumin so present in many of our dishes.

You can find more information in Spanish about the Arab influence on Andalusian cuisine here.

In this image created by Miguel Leiva, we can see what Muslim Malaga was like before the arrival of the Catholic kings.

In 1487 the numerical superiority of the Christian troops managed to wrest control of Malaga from the Muslims. The siege of the city lasted for months and finally on 13th August the city was surrendered, after which the Catholic Monarchs triumphantly entered on the 19th of the same month.

Although the official chronicles say that they expelled or turned into slaves the local and original population of Malaga, it is known from documents of the time found that a large number of people adapted again to the change; just as their own ancestors had done after the arrival of the Muslims.

The Malaga Fair commemorates this date every year, which is why it is always held around the 19th of August.

After the conquest a period of religious constructions would begin and these form part of the great monuments of Malaga, but that will be in another article.

2 thoughts on “Muslim heritage of Malaga: Al-Andalus, monuments and routes”