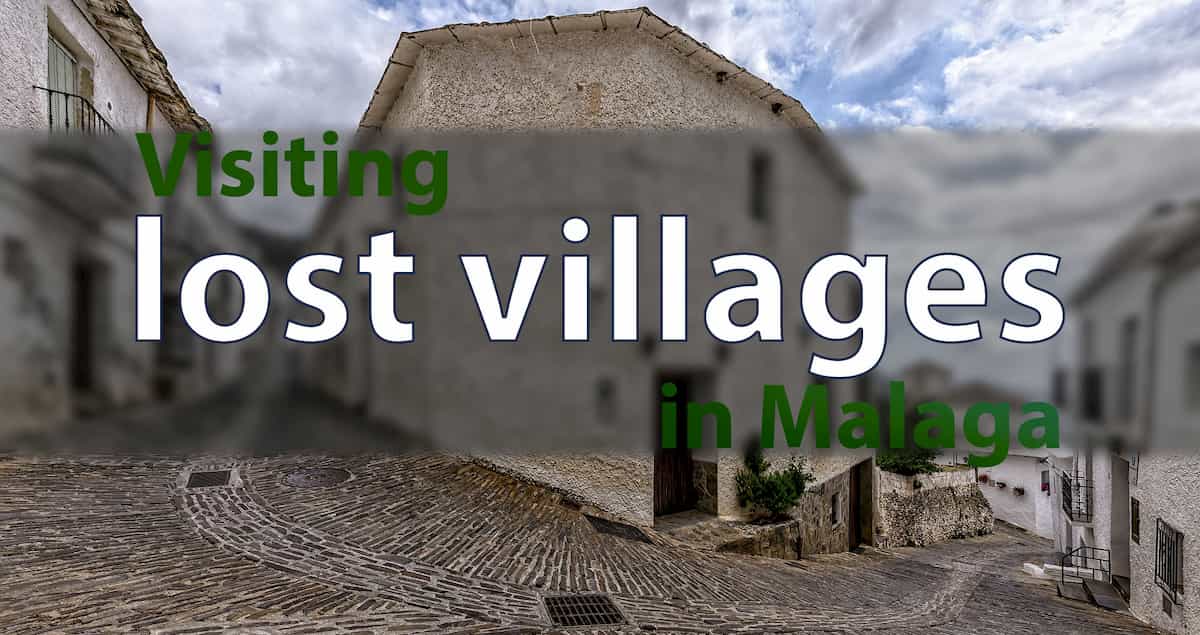 There are many villages in Malaga, but over time some have disappeared. They are still in many cases destinations that can be visited, so we are going to check those lost villages and some abandoned towns in Malaga.

These places usually have few inhabitants and offer the visitor a charm of their own. Villages that are located in natural surroundings and from where it is usually possible, in addition to visiting their historic buildings, to go on hiking trails.

Visiting those villages in Malaga helps to keep them from disappearing, we encourage you to make a plan to visit any of the lost towns during a weekend.

Although this town itself has not disappeared, it has ended up being annexed to the town of Macharaviaya.

During the year 2019 there have been 151 inhabitants; numbers that remain relatively stable since 2000.

Church and miracle of the Christ of the Green Band

It currently has the parish church as its main point of interest; a Mudejar building that was restored at the beginning of the 21st century and built during the 16th century. The tower of this church was a mosque during the period of Muslim domination.

Of this church, its mural paintings and a photograph that was taken in the 1960s by a local woman stand out.  The photograph in question is of the figure of Christ in black and white; it seems that the band of the figure turned green from one day to the next. Even the bishopric of Malaga would be interested in this event. After a study they ruled that there was no alteration to the image, it simply seemed that the band in black and white had changed to green without any explanation.

It is therefore a miracle certified by the church that has achieved little transcendence, but now you can visit.

For visiting Benaque or checking more photos, you can check the location in map: https://goo.gl/maps/jYEYeJFmR4zK7x3C7

Bobadilla was another village in Malaga until 1857, during which it was annexed to Antequera.  It consists of Bobadilla Pueblo and Bobadilla Estacion.

The train station of Bobadilla would be built during the year 1865 and would begin to agglutinate population around it. Nowadays it is one of the most important railway nodes in Andalusia through which medium and long distance trains pass.

From May 14th to 16th there is a Pilgrimage in Bobadilla.

The fair takes place by the end of August.

If you are interested in hiking routes you can visit Wikiloc to know some in Bobadilla: https://es.wikiloc.com/rutas/senderismo/espana/andalucia/bobadilla

Near Bobadilla is Antequera, so you might want to visit the Dolmens Site.

You can find the location in map and more photos here: https://goo.gl/maps/r2ynMFCn2uBUp2Dj8

Chilches has a long history dating back to the Roman period, during which it was called Cicer.

Over the centuries it became part of the Visigothic empire and was an enclave with defensive towers during the Muslim domination. Only one of the towers would survive until today, the one on the coast.

The fair of Chilches takes place by the end of July and beginning of August; it lasts 3 days.

From this village we highlight its beach, with an approximate length of 2 kilometers and a width of 25 meters. It is a family-oriented beach, mainly used by the inhabitants of the place and of average occupation during the high season.

The beach has access for the disabled, showers and public toilets.

To get from Malaga take the A-7 motorway towards Almeria-Motril, until you take the exit 258 signposted.

You can consult the map in the following link: https://goo.gl/maps/DfYryUnsfSVY6HoC7

Churriana has an ancient past that goes back to the Phoenician era of Malaga, during which it was called Siryana. It is located on the last stretch of the River Guadalhorce, so it is assumed that it would be related to the ancient Phoenician settlement at the mouth of the river.

During the Roman era, water was channelled from Fuente del Rey behind the present Civil Guard headquarters to Malaga. This canalization would end up in disuse after the construction of the San Telmo Aqueduct during the eighteenth century.

All the dominant cultures in Malaga have passed through this enclave of our province.

Of Churriana we emphasize the Airport Viewpoint, its mountain range with an enclosed space for barbecues, as well as its cave church from the seventh century.

During Halloween in Malaga, they usually perform a passage of terror in the center of the town.

You can find its location in the following map: https://goo.gl/maps/tE7NR4D7kXnBKmUq5

We believe that the origin of this population goes back to the Iberian period, although its name comes from the Roman and is translated as “Dove”.

After the Christian conquest it was given as payment for services and ended up being a lordship until 1811. It had its own government until 1862 when it was grouped together with Sayalonga.

It is a small town of about 300 inhabitants that suffered great disasters in the past.

Of Corumbela we highlight the church with the mudejar minaret which in the past was a mosque. From the minaret, also called the Era Viewpoint, you will have access to beautiful views of the surrounding area.

You can also visit the Manantial de las 3 Fuentes, a natural water source that was used in the past.

Corumbela is situated to the north of Caleta de Velez and Torrox, very close to the Sierra de Tejeda, Alminara and Alhama. You can locate this village on the following map: https://goo.gl/maps/5hUk36FSMQXrDh9m9

This small town comes from an old Arab farmhouse. It is known for being named Daymas during the conquest of the territories, being incorporated to the town of Velez in June 6, 1486.

It currently has about 50 inhabitants.

From this place we can highlight the Church of the Conception of Mudejar style. The old Arab minaret, one of the oldest in Spain, has been converted into the church’s bell tower. This minaret was declared an Asset of Cultural Interest in Spain in 2004.

You can also find the 12th century Moorish Fountain.  The legend tell us that this lost fountain has miraculous properties; if a single person drinks it they will end up getting married, if they are married they will have a child; furthermore, legend says that it has the capacity to increase sexual vigour. Could it be true? We encourage you to discover it.

You can check the location in map and more photos here: https://goo.gl/maps/nu67bQWTBi7NUqnZ6

There are a few hiking routes in Daimalos, one of them is ideal for the spring and visiting the Fountain:
https://es.wikiloc.com/rutas-senderismo/circular-de-arenas-a-daimalos-almendros-en-flor-y-las-tres-fuentes-45767017

With about 729 inhabitants, this district of Malaga has all the characteristics of the typical white Andalusian village. It is located at the foot of a hillside in the Montes de Málaga and very close to the village of Totalan.

Its history dates back to the Christian conquest; these lands and a tower in bad condition were taken away from their former Muslim owners, who died in the confrontation.

Its roads are narrow and curvy, typical of its old Muslim layout. It requires a certain amount of driving skill to drive in.

In late July the main festivities are held in honour of San Vicente Ferrer.

If you are interested in hiking routes and discovering natural spots, you can take a look at the collection of trails of different difficulty in Wikiloc: https://es.wikiloc.com/rutas/senderismo/espana/andalucia/olias

You can check the map if you want to get to Olías at the following link: https://goo.gl/maps/PAcvKKC4Z4CZXiV37

The village of Peñarrubia was located at the foot of the mountain range bearing the same name and was inhabited until 1971. The reason why it had to be evacuated was the construction of the Guadalteba reservoir; almost all the residents moved to the Santa Rosalía neighbourhood in Malaga.

It had up to 1832 inhabitants one year before it was evicted. There were neighbours who hid from the Guardia Civil, they had never left their village and they feared what life would bring them from then on. The water without remedy ended up swallowing up memories and homes that for years had been storing up a shared history. The bell tower of the Church remained as a symbol that resisted falling; it stood out from the water when the level dropped, until finally they had to take it down.

Although the village itself cannot be visited because it is under water, during the dry season it is possible to see some buildings sticking out of the water.

There are those who dive in the area.

From this area there are many hiking routes of all kinds of difficulty. You can find some of them in the following link: https://es.wikiloc.com/rutas/senderismo/espana/andalucia/penarrubia

There is also a lookout point and the Peñarrubia Vulture Observatory. More information in the following link from the Diputación de Malaga:
https://www.malaga.es/es/turismo/naturaleza/lis_cd-4742/

The location in map is in the middle of the reservoir, however you can see some places of interest around it: https://goo.gl/maps/ezed7DvbwTbDQmsr6

During the seventeenth century, this town originated around a castle given to a surname that had served the conquest of Antequera; these houses belonged to the employees of the marquisate and their families. This castle would end up disappearing in 1842 due to a fire and today in its place there is a palace-cortijo.

The neighbours who surrounded this castle had to pay a fee to the marquisate, in the form of production. It is an example of a feudal village that currently has just over 300 inhabitants; the number of residents however is about 70.

As a curiosity, the annual payment of spices died along with the last marquises of this territory; but not the annual payment, which continued until 2005. A feudal land that for lack of deeds was hindering the growth of the village, since no land could be bought or sold. It was the last town in Spain to maintain this medieval form.

Located at the foot of Puerto de las Pedrizas is this town where there are no supermarkets or schools. There is however a bar where you can eat and enjoy its gastronomy, Bar La Peña (map).

The first weekend in May the festival of Villanueva del Cauche takes place, in case you want to visit this special place in our territory.

The Palace of the Marquises is located in the Plaza de la Constitución; is the left building in the photo below.

In the proximity of this location is the Roman enclave of Aratispi; about 8 minutes by car.

If you are interested in walking in the nature, you can find hiking routes of different levels of difficulty in the area: https://es.wikiloc.com/rutas/senderismo/espana/andalucia/villanueva-de-cauche

Find the location in map and more photos at: https://goo.gl/maps/aHazVnnbYCYGn4Z87