Seville architecture is a mix of Arabian and Christian styles, which represents the most typical combination in Andalusia. If you are looking for flamenco, fiestas, tapas and bullfights, here are its best representations, alongside with century old history and culture. Seville is a city for all types of tourists and for any time throughout the year.

To know Seville, a weekend visit might not be enough. In fact, many visitors who frequently travel to Seville have not discovered all her charms, as this fabulous city has a myriad of attractions for tourists, visitors and residents. 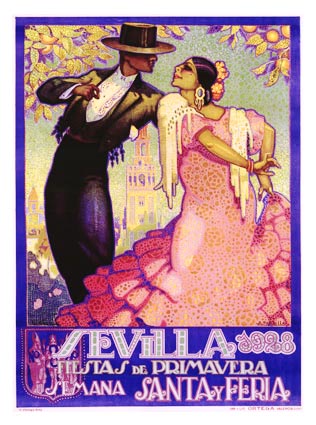 Thus it might be a good idea to plan in advance your most important visits (La Giralda and the Cathedral, the river, Torre del Oro, Plaza de España, Paseo de las Delicias and Parque de María Luisa, Barrio de Santa Cruza, la Macarena, etc.) in order to maximize your visit to the Andalusian capital.

The Seville airport San Pablo is situated 10 km (6 miles) northeast from the city, with daily national and international flights.

You can reach the city centre by means of a public bus, which leaves every half an hour and which is situated outside the arrivals lobby. There you find as well the Taxi stop.

The train station Santa Justa situated in Avenida de Kansas City concentrates all the rail traffic and on the web you can see how to get here from any national origin, either with the high speed train AVE or other regular regional trains from other points throughout Andalusia (www.renfe.es). Seville has very good connections with Madrid, Barcelona, Cadiz, Cordoba, Granada, Huelva, Jaen, Malaga, Almeria and Valencia.
There are as well two Bus stations in Seville linking the capital with the villages in the province and other cities. (Plaza de Armas in Avenida del Cristo de la Expiración and Estación de Autobuses del Prado in Manuel Vázquez Sagastizábal).

The highways that link Seville with other cities and the surrounding municipalities are constantly improving; hence the access by car to Seville is convenient and fast. The highways are designated by the letter "A" or "AP" if it is a toll road (i.e. A-4 or AP-4). The speed limit on these roads is 120km / h (74mph). In cities, the speed limit is 50km / h (31mph).

The highways to Seville are:

Distance from Seville to other cities:

In Seville you can find its most important attractions within a relative short walking distance. Public buses are quite reliable to get around the city. The most useful are the circular lines (C1, C2, C3 and C4) which are operating throughout the downtown. Buses operate from 06.00 and 23.45 h in winter and in summer until 24.00 h. When finished the day service, night service begins operating every hour until 02.00 h. There are also extra buses on Fridays and Saturdays, between 03.00 and 06.00 h. Bus tickets cost € 1 and are sold by the driver. The Bonobus can be purchased at tobacco shops, kiosks and in any TUSSAM counters.

Seville is a bustling city with lots of narrow streets, and the ones who dare to drive –or park- in the main areas are considered very courageous.

The parking lots in particular are very limited and often restricted to residents of the companies; so avoid parking tickets and unnecessary stress, renting a car only for the outskirts of the city. (Car hire)

The absence of hills makes it easy to explore the city by bike and the narrow streets of the historic centre can be toured better with a two-wheeled vehicle. You can hire bicycles in Cyclotour in Parque de Maria Luisa, Avenida de Hernán Cortés and Scooters in Rentamoto, Calle Padre Méndez Casariego 17.

A more relaxed way to see the city is by horse and carriage. The stops for these carriages are in Cabo Noval, Plaza Virgen de los Reyes, Plaza del Triunfo, Puerta de Jerez and Torre del Oro.

Things to do in Seville

The locals of Seville consider the Cathedral to be the centre of the city. We recommend taking the stairs to the belfry of the cathedral to enjoy the panoramic view from Seville. The labyrinth of narrow streets and surprising courtyards of the old quarter of Santa Cruz is a short walk from the Cathedral. In the opposite direction, you find the district of Arenal, with the Torre del Oro and La Maestranza. If you cross the river towards Triana, you will find the Calle Betis with many bars and outdoor terraces.

The only sites of interest which are not in walking distance are the Isla Magica and the old city walls in the district of La Macarena.

Isla Magica (Magic Island) is a Theme and Leisure Park set in the Age of Discovery situated on the Isla de Cartuja (www.islamagica.es ).

There is as well a touristic bus available with set up route designed to see the most interesting places in Seville. During the whole ride visitors can listen through headphones to a guide explaining the route, which is available in several languages. You can get off and on bus at specific stops and walk smaller itineraries.

The tourist card Sevilla Card offers discounts in many shops, bars and restaurants, plus free admission to most museums and monuments. The card also allows limitless use of public transportation (buses TUSSAM) and tourist buses. You can purchase this card in the main tourism offices, airport, railway station, travel agencies or through the website www.sevillacard.es. 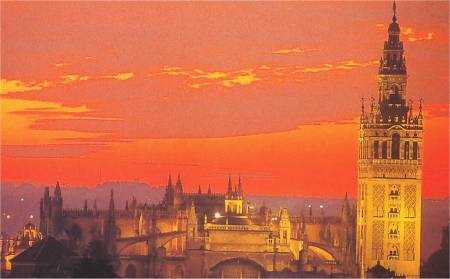 In 2007 Seville has been awarded as the ninth best city in Europe by the magazine Travel & Leisure; ahead are Rome, Paris, Venice, Florence and Prague, among others. The Andalusian capital accumulates an impressive historical heritage, which emphasizes religious architecture, which makes Seville one of the Spanish cities with the highest number of churches and convents. Regarding civil architecture is outstanding the Alcazar, the oldest inhabited royal palace of Europe.

It was probably this offer, together with the local peculiarity, such as the open character of its people and their taste for good food, prompting the city to repeat as a favorite among the top 10 in Europe.

Seville is not only Flamenco and bullfighting. There is a more refined culture in Seville. Opera and classical music concerts are held at the Teatro de la Maestranza, which is also the headquarters of the Royal Seville Symphony Orchestra. Besides classical music, theater and flamenco, the Teatro Central in Isla de la Cartuja offers somewhat more contemporary performances, such as pop concerts, which are also held in the Teatro Lope de Vega. The open air events (concerts of pop, rock, opera and theater) take place in Europe's largest auditorium, El Auditorium, in Isla de Cartuja.

In Seville there is a great variety of bars to suit all tastes. For a drink in a relaxed atmosphere, while observing the people coming and going, you can go to the area around the Cathedral. To start the night, it is best to do so in any of the bars in the Barrio Santa Cruz. From there, the Calle Betis and Plaza Alfalfa are the most popular places to continue the night until the wee hours of the morning. 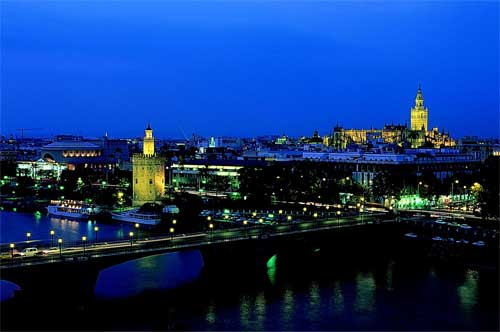 The commercial heart of the city is Sierpes Street and all streets running parallel to it (Calle Velazquez, Calle Tetuan and Calle Cuna). You'll find traditional and designer shops. Nervion, near the Santa Justa train station, is a shopping mall which houses several stores. The old Station on Plaza de Armas also houses a large collection of shops.

Seville is one of the most visited cities by foreigners who are attracted by her beauty, the joy of its people and its colorfulness.

In spring, when everywhere in Seville lingers the scent of orange blossom, are held the two most impressive feasts of the year: the Semana Santa Easter processions and the April Fair with a lot of folklore.

The Spanish tourist board has prepared several thematic routes through the province of Seville, each with a particular charm. One of them is the Ruta de Washington Irving: The diplomat, traveler and writer fell in love with Andalusia in 1828, where he discovered the Moorish heritage and seduced by the "exoticism" of Andalusia, he began a journey between Seville and Granada, following the traces of the Hispano-Muslim past. Currently, the route he did in 1829 is marked by all its constituent villages, including cities, monuments, archaeological sites, villages, food ... etc.

Other tourist offices are situated in the airport San Pablo and the railway station Santa Justa.

The city of Seville is located along a river. The weather in Seville is ideal for those who want to move from the cold to a warm city. This city is considered one of the warmest cities in Europe. The city offers many other things to do while on holidays. Enjoy your holidays in Seville.