San Pablo Airport is located ten kilometres northwest of Seville. Although Seville is the capital of Andalucia, almost 80% of air traffic is domestic. The terminal was redesigned on the occasion of EXPO 92, with an emphasis on local culture, a mixture of Arabic and Spanish influences, with components of the Mosque, Palace and orange trees. It is a three-storey modern airport with two baggage claim areas. 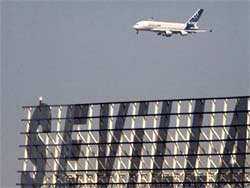 Seville San Pablo Airport is located on Highway A-4, heading to Cordoba and Madrid. From Seville you have a quick and easy access to Jerez (less than one hour), Malaga (about 2 hours) and Faro in Portugal (about 2 ½ hours).

Seville's city center is easily accessible via taxi and urban bus. The journey by taxi is about 15 minutes and the price is around 20 Euros. Buses connect the airport with Sevilla city centre depart every 30 minutes between 6:15 am and 11 pm. The trip takes 20 to 30 minutes and tickets cost 2.30 €. There are also several car rental companies at the airport.

Seville Airport has a medium size; therefore the supply of stores is quite limited as due to the large number of domestic flights there are not many shops for tourists. Most shops are in the public area before billing. In the passenger area is situated an Aldeasa store that sells cigarettes, drinks, perfumes, etc. There are also three bars where you can eat something or have a coffee and a pharmacy on the first floor of the terminal.

Recently the number of international flights to Seville is increasing due to the low cost carrier Ryanair and British Airways which now also offers flights to the capital of Andalucia.

Those who require a transfer to Seville airport from Malaga, should visit our airport transfers section for the best websites and prices.