Coin is situated in the fertile valley of the Rio Grande approximately 21 km inland from Marbella and there is little doubt that a community of some kind existed on the spot long before the Roman conquest. Nevertheless, it was the Romans who gave it the first name which has survived: Lacibis. It became a market town, a transition point for the minerals being quarried 5 kilometres or so to the south in the Sierra Blanca. Marble from these quarries was certainly used in the construction of the Roman town of Italica, which once stood close to Seville. 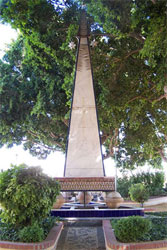 The quarrying of marble and the mining of iron ore went on well into the 19th century. During the time of the Visigoths, who supplanted the Romans as rulers of the peninsula, the town lost its lustre and appears to have been deserted and left to fall into ruin. By the time that the Moors resettled and rebuilt it around 929 AD virtually its entire Roman heritage had been lost, and what little was left disappeared in the rebuilding. 1485 was a momentous year in the region. The Christian re-conquest was in its final triumphant space, and villages and towns fell to them like grass beneath the scythe. Coin was taken after a siege in which legend has it that no other than Christopher Columbus took part. A certain Captain S. E. Cook of the Royal Navy visited Coin, along with Cártama and Alhaurín in 1829, and was mightily impressed. "These villages," he wrote, "are on rising ground above the river and in beauty of situation and cultivation cannot be excelled. They afford a specimen of the whole country when possessed by the Moors, being surrounded by gardens with orange, lemon and palm trees and abounding in all the fine as well as the more common fruits."

To this day an orange tree is featured on Coin's coat of arms One of the most picturesque yet solemn places in this town of Malaga is the shrine of Nuestra Señora de Fuensanta. The beautifully preserved chapel stands on top of a hill beside the ground which is used for the annual fair. The situation and views are magnificent, but the sombre note is struck by the now-abandoned house which stands close by in a field. In 1893 it was the site of a brutal murder in which the local priest was shot by intruders who believed him to have hidden away a cache of money. The story of the crime and its aftermath were told in Bartolomé Abelenda's book, The Coin Crime.

When going from Malaga airport to Coin, an easy, fast and comfortable transportation method is the airport transfer:

Coin is a town with a lot of industry and a forward-looking attitude; however, to its further credit is the fact that it has remained reasonably untouched by the influence of the coast and it retains its Spanish character and charm. The nightlife is good with something to suit all tastes, from traditional tapas bars, bodegas and restaurants to modern air-conditioned wine bars and night clubs. It is also fortunate enough to have two ferias each year, the first being in May, the second in August, the locals enjoying both to the full. This is not the time to fall ill as the Feria's spectacular opening and closing fireworks displays are launched from the hospital grounds and continue long into the night! Coin was also featured as the setting for the BBC's spectacularly unsuccessful soap opera, Eldorado.