The main village, like so many in the intricate Serranía of Ronda (Ronda hills), sits on a mountainous height and its streets are of Arabic style and very intimate. The parochial church is dedicated to Saint Francis of Assisi and was built in the 16th century according to some sources, and in the 17th century according to others, although it was later enlarged. 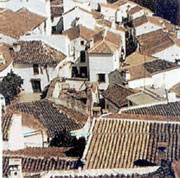 Within the natural environment of this village of Malaga, there are places of scenic interest with exceptional flora and fauna that attracts many ornithologists, such as the El Charco Picao, the so-called hermitages of El Castañuelo and El Chorillo, Las Vegedas, La Tomillas and of course the nearby Genal Valley.