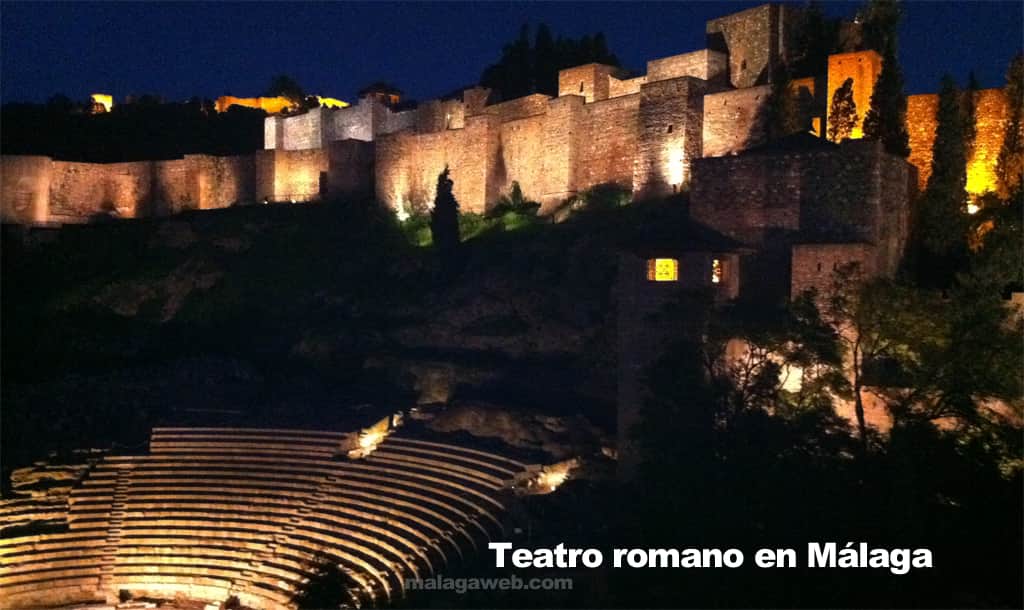 This title would be the advert we’d see about Malaca around the year 200, had we have published it in the blog back then…Ok, Malagaweb has been around for a while, but not that long!

If we would have lived in Londinium around the year 200, and we would have wanted to enjoy our holiday in September in Malaga, then we had to leave on the first week of August!… however, the positive side is that we would enjoy a trip with stopovers in the great ports of the olden days in the Atlantic…although not for a modest price.

How much did a trip to Malaca (Malaga) cost?

Imagine an advert like this: “Enjoy your holidays in Malaca for only 606.91 Denarii“…but the 24-day trip would have enough boat trips for us to get fed up.

The prices in Denarius, based on the use of a faster sail ship and a civil boat (if necessary and with walking paths); on these options of the route:

Bearing in mind that one Denarius could be equivalent to 7.64 pounds*, if we do calculations, it comes up to just over 5000 euros / 4441 pounds…a luxury that not many could afford, and this without including our luggage and walking on foot over the mainland.

The cheapest time of the year to make this trip was summer and autumn. If we decided to move during the winter to Malaca the price skyrocketed to 1473 denarii (11257 pounds) and per extra kilogram to 24 denarii (183 pounds). The route to take was different, the Atlantic Ocean was avoided because of the storms and a large part of the journey was made by horse or carriage and sailing along rivers.

On this map we can see which places we would pass through if we would have lived in Roman times: 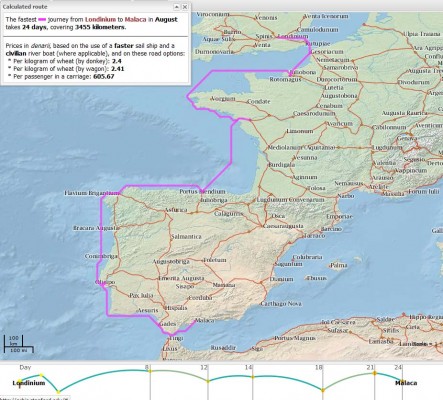 According to the source I consulted, this was part of a popular route.

* Denarii in pounds and economy of ancient Rome

For the conversion from denarii to pounds or euro I have relied mainly on the daily food consumption of a middle-class family; also on the price of some food or basic goods, although it is different from what we have today. Some people take in consideration the value of the currency according to its weight and the current price of gold or silver, but those values fluctuate over time so I find it less accurate.

The Denarius was worth more than the metal it was made of; from 1.4 to 2.8 times its value according to sources consulted.

We must also take into account the great inequality that existed between rich and poor, as well as the fact that exact equivalence is not possible since it does not take into account supply and demand, scarcity or abundance of products, etc…but at least we can get a rough idea.

1 Denarii is equal to 4 sesterces and 16 aces, coins used then.

For those like me, interested in the details, here are the prices of some food and basic goods from ancient Rome before the 3rd century, when the boat trip was calculated:

The salary of that period must also be taken into account. To give you an idea, I am going to present the average salary of various occupations:

The monthly salary of the wealthy and higher status sectors was far from average; they were the only ones who could afford long trips and luxury goods such as garum.

– Hire a car in Malaga from 1 Denarii per day, forget about horse caravans and enjoy the air conditioning!

Holidays in Malaga (Malaca) for everyone

Today we have the privilege of being able to travel great distances and enjoy the comforts at affordable prices. Who would have thought back then you could go away on a Friday 1,678 km* away and come back on Sunday?

*1678 kilometres is the imaginary straight line that separates Malaga from London.

If we decide to hire a car in Malaga, the prices nowadays are much cheaper than in the olden days. Just imagine an advert like this:

– Rent a car in Malaga from 1 Denarii a day, forget about wagons and enjoy the air conditioning!

So, do you fancy coming to Malaga these holidays? You’ll be able to enjoy the Roman theatre, next to the Gibralfaro castle. In other periods, not everyone could afford it, but nowadays it’s easy to spend a cheap holiday in Malaga.

Route information provided by the Stanford University map at  https://orbis.stanford.edu/ .

Holidays in Malaca for only 607 denarii – A trip back in time was last modified: November 9th, 2020 by Raúl G.T
Comparte este artículo: