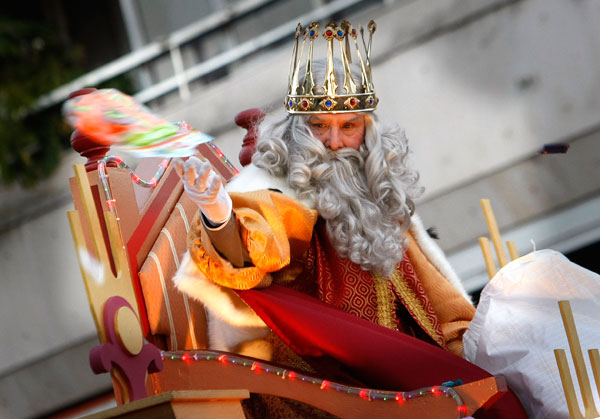 The names of the 3 kings are Melchor, Gaspar and Baltasar. Although we Spaniards are very used to these names, they are not that popular outside Spain.

There will be no parades in 2021 for prevention of Coronavirus in Malaga. Continue reading to know about the history of this typical Spanish event. While in other countries is Santa Claus the one bringing gifts, here the traditional Three Kings who visit Spain and Malaga every year bring gifts in a special second night, especially for children.

Night of the Three Kings on January the 5th

The Catholic tradition tells that the Three Kings traveled from the East to bring gold, incense and myrrh to the newborn baby Jesus. With time, some symbolic elements have been added to the story as well as the custom of celebrating the arrival of the Three Kings during the day of the Epiphany (January 6).

In the past the Three Kings distributed roles regarding giving out gifts, unfortunately for Balthazar he was in charge of giving coal (the real one, not sweet) stones or wood to children who had not done well during the year. Gaspar gave candy or nuts and Melchior brought clothes and shoes; the gifts of those times were adapted to the needs of the moment. The Three Kings, as such, are not very widespread and are celebrated only in some Spanish-speaking countries, mainly because of Father Christmas or Santa Claus has prevailed, although both have the same origin, the ancient celebration of the  winter solstice.

There is variety in representing the Three Kings in Europe, in countries such as Italy its ‘La Befana’, a witch who seeks redemption and is responsible for bringing the good children presents and scare the bad ones.

In other countries like Germany is just a special day for Catholics, unlike in Spain where everyone celebrates. In Germany on that day there are no gifts or family meals; it is a day of charitable action.

Tradition says that the one who decides whether to give coal to the children is the Carbonilla, a page of the Three Kings.

Will they bring lots of charcoal? At Malagaweb.com we expect that you have behaved well and if they bring you charcoal, that is the sweet one you can eat.

About the Three Kings Parade

The procession of the Three Kings (Cabalgata de Reyes) is a mainly Spanish tradition. The first parade which is recorded took place in 1876 in Alicante and thanks to its success it was expanding rapidly to other cities. In 1917 was the first Parade in Andalusia and today is a typical established tradition throughout the province.

In the beginning it was a day set for charity and the Parades were responsible for collecting toys for disadvantaged children; after many years this healthy habit was disappearing giving way to the typical candy being thrown from the coaches just before Twelfth Night when children wait for their gifts. The origin of eating a ‘Roscon de Reyes’ for Twelfth Night dates back to Roman times; the Romans dedicated festivals to the god Saturn to celebrate the increase in brightness after the winter solstice. During the celebration they baked round cakes of figs, dates and honey which all social classes including slaves used to enjoy.

From the third century was introduced the dry bean into the sweet. Who got it was considered king of kings for a short period of time; this tradition continued in use and there are records of its use during the Middle Ages with small variations.

At present there is usually a treasure and a bean inside each cake being the one who the gets the bean responsible for paying it and the one who gets the treasure is the king of the house for a day. The Three Kings parade in 2020 (Cabalgata de Reyes in Spanish) bring up to 12 tons of sweets which they throw everywhere from the cars. Pasts year the parade was organized in three main blocks: Fantasy, Christmas and Royal Courtship.

The Christmas cars parade comes with the royal pages, a ballet, angels decorated cars and shepherds next to a moving nativity scene.

Finally the Royal Courtship formation with acrobats and the decorated cars of Melchor, Gaspar and Baltasar kings.

Traffic roads will be closed in Malaga centre due to the Parade from 12 at night on January 4 to the ending of the parade on January 5th.

There is a 5% chance of rain on January 5, this probability will range from 10% in the morning to 12% at night.

It is quite unlikely that it will rain during Three Kings’ Night in 2020.

Remember in Spanish you can ask about the ‘Cabalgata de Reyes in Malaga’ if you need orientation.

There are private chairs available for those who want to see the 3 Kings Parade from a comfortable place. Price for chairs rised in 2018 and were as follows:

Beginning of the parade is at 6:00 pm from Malaga Town Hall in January the 5th.

*We don’t know what parking places will be closed due traffic interruptions from 12 at night on January 4 to the ending of the parade on January 5th.

Below are some other parades although from past year, they should still have the same itinerary.

Cavalcades and schedules in other places of Málaga

In addition, the different districts of Malaga will have a cavalcade. The itineraries below could change from the last year:

On January 3rd, the royal page will collect the letters from the children in the Parish of Our Lady of Sorrows from 5.30pm to 8.30pm.

4 January from 12 to 14.30 and from 15.00 to 18.30 there will be a family party in which children can participate in different activities in Parque de la Alegría.

January 4th at 17.30, there will be another parade from Miraflores School.

The parade will take place on January 4th between 5pm and 7pm after the arrival by helicopter of the Three Kings at Doctor Fleming Public School.

At the end there will be a party with hot chocolate where children can greet the Three Kings.

On 3 January the festival begins with activities that will also be held in the Parque del Oeste and Parque Litoral from 11.00 to 3.00 pm. There will be an artificial ice rink, Christmas train and inflatable castles among other activities aimed at children.

At 10.30 am from Jucar Street there will be a parade organized by the Neighborhood Association as every year and will end in Parque del Oeste.

4 January: Royal Postman in Beltrán Lucena Cultural Centre from 5pm to 7pm. This is the time for the children to hand in their letters to the Three Kings.

The Campanillas parade will take place at 5.30 pm from Tiziano Street and will end at the Patio of the José Calderón School.

The start of the parade will take place on January 5th in Torremolinos. There will be 10 carriages and 3 royal thrones.

Around five tons of candy will be distributed and it will end at 8:00 pm in the Town Hall of Torremolinos.

The magic of the Three Kings will allow them to visit the 3 urban centres of this municipality and parade while throwing candies.

4:00 pm Official start of the Parade in Benalmadena Pueblo.

The arrival of the Three Kings will be in style, no less than by helicopter arriving shortly before the parade at the Elola Social and Sports Complex.

There will be a total of 25 carriages in this year’s parade in Fuengirola, which will take place on 4th January alongw the main streets and avenues. Gluten-free jelly beans will be distributed.

The Three Kings will arrive in Mijas with the purpose of visiting the three urban centres of Mijas for the enjoyment of the little ones:

The parade will be made up of 27 carriages that will make the usual route. As a new addition this year there is artificial snow for the enjoyment of children.

There are a total of 4 parades taking place on the 4th and 5th of January in Marbella, San Pedro de Alcantara, Nueva Andalucia and Las Chapas.

At midday there will be a parade of the Three Kings in historic cars through the streets of the municipality from Avenida Oriental, through Calle Castilla and Calle San Miguel and Avenida de la Constitución to Aspandem, where they will visit guests at their residence.

On 5 January it starts at 5pm from the Ojén petrol station to Plaza de Andalucía.

Like every year the Three Kings’ Cavalcade in Estepona will take place on the 5th of January. It will be from 5pm when the kings begin their parade for the enjoyment of all the children from the Avenida de Andalucia to the Orchidarium of Estepona around 8pm.

The Three Kings will arrive at Nerja Town Hall on 5th January for the enjoyment of the youngest members of the family and those who wish to attend this event. The departure is at 5.30pm from Parque Verano Azul and ends at the Balcón de Europa, where, as every year, they will be given the key to the city to open all the doors and be able to give the gifts to all the children in the municipality.

6th January: Visit of the Three Kings at 12.00 through the streets of Maro to the Church Square.

As every year, the Three Kings’ parade will take place on January 5th and will start at 4pm.

Its itinerary starts in the Plaza de la Iglesia and ends in the popular Plaza de las Tres Culturas.

There are already details for the Cavalcade of the Kings of Torre del Mar in 2020; it will be on January 5 from 5 pm.

In addition, on 2 and 3 January the Royal Postman will be at Calle Princesa from 4.30 pm to collect letters from children who have not yet sent them to their Majesties. There will be Roscón de Reyes, children’s workshops and an inflatable castle for the enjoyment of children.

The magic of the Three Kings will make them possible to parade on January 5th in Velez-Malaga for the enjoyment of the children. They will start on foot from the Beniel Palace at 5.15pm to the Plaza de la Constitución.

The official parade will start at 5.30pm from Plaza de Las Indias.

The Parade is scheduled for January 5th at 6pm from Martinez Astein Avenue. A show designed especially for children of all ages that ends with a visit to a living Nativity scene in the square.

The parade of the Three Kings will leave the Montesol building at 6pm, going through the streets of Coín as is the tradition. There will be fun especially for the children who visit the town on this day.

Itinerary: The parade will go through the streets of Coín and will end in the Plaza Alameda.

Itinerary of the Three Kings in Torrox

The Three Kings, thanks to their magic, will be able to visit Torrox on January 5 at 4pm. They will arrive for the enjoyment of children. The parade will depart from El Morche.

4 thoughts on “Night of the Three Kings: Parades, history and curiosities”