In Fuengirola (Málaga) is held every year a Medieval Market in the Castle Sohail. It will be possible a time travel to the Middle Ages, thanks to the launch of the medieval market in Fuengirola castle.

When is the Medieval Market in Fuengirola?

During the first two weeks of August or September.

The event is unique in Spain, as it takes place within an authentic Arab fortress of the time. The area will present a typical medieval aspect, with flags of the time, background music and many of the participants dressed in historical costumes.

Sohail Castle in Fuengirola, a restored Moorish fortress and converted into a auditorium. It hosts a variety of musical events during the summer months, has been for some years the perfect setting for the celebration of the Medieval Market in Fuengirola.

What to do during the Medieval Market?

At this market you can find all kinds of products and appealing activities that make the visit a time travel and a tour of Spain to the time of the bards, the craft guilds, traditional gastronomy, etc. 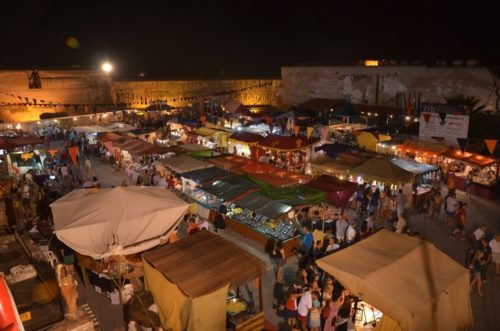 Thus, workshops for clay, bread, leather, toys, jewelry and woodwork will allow visitors to see how in ancient times they made those products without industrial action.

Other attractions that have already enjoyed great success in previous editions are archery, donkey rides, witches and fortune-tellers, stilts, storytellers and children’s games, juggling, the costumes of the time and street theater.

This market in Fuengirola Sohail Castle, considered one of the best in Spain because of its location. The Castle open from seven o’clock in the afternoon until two o´clock in the morning.

In the surrounding area of the Sohail Castle you will find parking. You can also go walking from the Fuengirola train station.