In March 2017, the Alameda Park was requested to be declared a Property of Cultural Interest. A park that underwent a major renovation in 2007. The 19th century environment was adapted to the 21st century. This refurbishment improved the experience of walking through the park and added small areas to rest.

Below the park are the remains of the numerous houses that once were attached to the Alcazaba and that were demolished for restoration of the monument.

Initially, the entire area corresponding to Malaga Park was sea. The port at that time covered much of what is today Alameda. At first the idea was to build houses in this intermediate zone but thanks to a resolution of 1896 the works were conditioned to the realization of gardens.

Below the park are the remains of the numerous houses that once were attached to the Alcazaba and that were demolished for restoration of the monument.

In 1897 it was decided to bring tropical and subtropical species to the park. It wasn’t until 1899 that the plantation began, turning it into what would be the lung of the city. A place had been made where today you can relax under the shade of large trees and subtropical palm trees.

Throughout history it has been a place of celebration and events, from the August fair to Carnival. A meeting point for Malaga residents and a cultural showcase.

A walk through Malaga Park will show you not only its varied flora. You will find romantic spots ideal to take in together with your partner, fountains and sculptures that honour different personalities that marked a milestone in the city’s past. 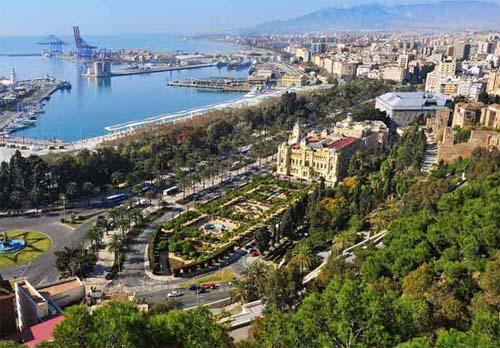 Among the oldest monuments in the park are the Caracola Nymph (1878) and the Nymph fountain of Cántaro (1878) in the Parque de Malaga. 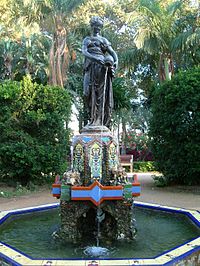 The Park has a municipal auditorium where different events take place throughout the year.

In the harbour-facing area is the so-called’ Pond of the Ducks’. There were many children who after growing up their pet decided to release them into this place, I’m one of them.

Malaga Park is a place to rest and recharge your energy under the shade of a centenary tree. A green space in the city inviting you to visit it.

Where is Malaga Park?

Very close to the Cathedral of Malaga, the Alcazaba and the Pompidou Centre.