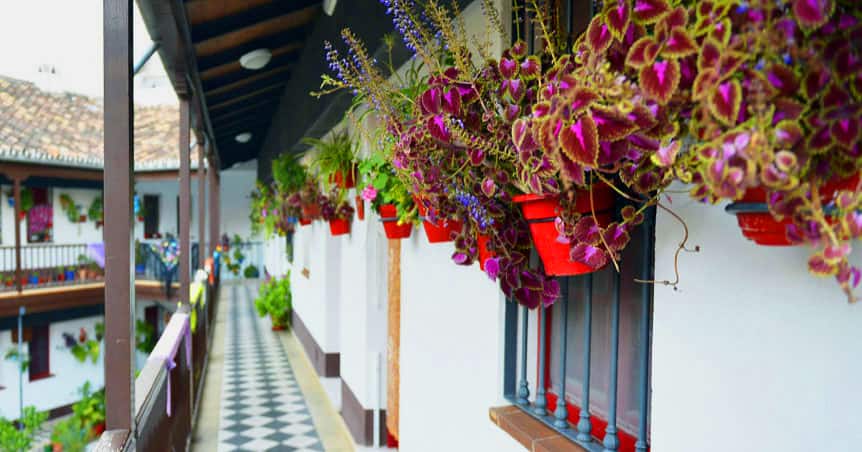 Corralones Week is coming to Malaga, but what are the corralones? Many of you who follow the blog will not know them, even though I had some idea of what does it mean I had to read some articles before; it is not a common word. Be my guest to read about the history of two of the oldest neighbourhoods in Malaga and learn more about the so-called corralones, traditional courtyards or patios in Malaga.

History of the traditional Andalusian patio

I thought it would be interesting to tell you about the history of the Andalusian patio. These patios, centric, used to be the meeting place of the neighbours throughout the day; decorated with plants and a fountain or central well, are a extension of the houses.

What is the origin of the Andalusian patio? In the following picture I think it can all be resumed, I bet that many don’t need to keep reading after having seen it. 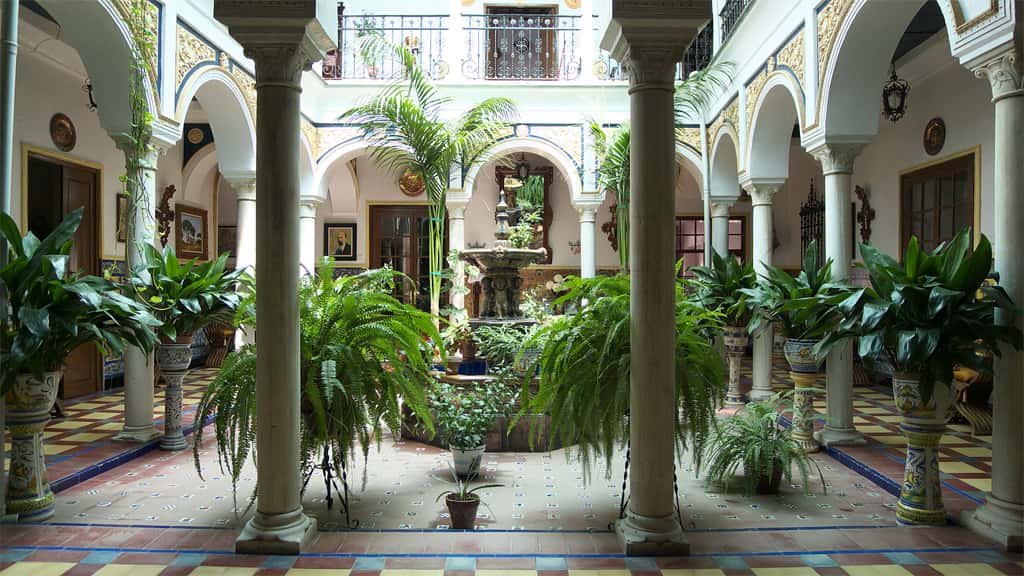 Still wondering what’s so special about this image? You can see a clear similarity with the Arab and Roman architecture.

In ancient times, plant decoration had a religious motif. Each plant was placed on the patio as an offering to the gods or to commemorate a deceased person.

Today, the patio decoration is a source of pride. There are still many old buildings throughout Andalusia that still have this type of layout.

If you like them you can visit the festival of the patios in Cordoba.

Purpose and fuction of a patio

The corralones are nothing more than a group of houses oriented towards a central open courtyard (patio in Spanish) that is located inside a rectangular building. In the centre of the patio there used to be a community well from which to draw water. Families shared activities during the day and night in that place.

¿So what is the purpose of a patio? A patio is a meeting and shared place for the neighbours of the building. During the years of washing by hand sometimes the laundry was also in an area of the patio.

Corralones and patios are very typical constructions that you can find in Andalusia. Most of those traditional ‘corralones’ are from the mid-19th century; built as cheap housing for the working class. Inside you can still breathe an old air that transports us back in time, a not so distant past where families raised their children in community and shared their life daily with their neighbours.

In Malaga, the neighbourhoods of La Trinidad and El Perchel are in the historic centre of the capital, however tourists do not usually wander around those areas. The Guadalmedina riverbed acts as a dividing line, a border between the neighbourhoods and the centre; during the Corralones Week these districts resurface with force, claiming greater prominence in the city. 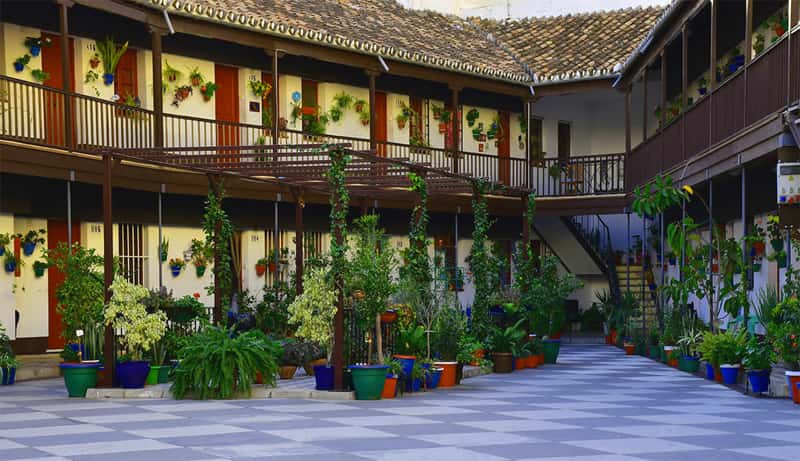 Discover the old and traditional homes for working class families in Malaga during the 19th century. It is a good opportunity to immerse yourself in the history of Malaga and experience first-hand how the old neighbourhood homes used to be.

This historic neighbourhood of Malaga is bordered to the south by El Perchel; you will find traditional architecture and patios as well.

This neighbourhood has marked the history of Malaga during the 19th century. Its origin dates back to the construction of a convent and a church in 1488, just over a royal camp used during the siege of Malaga.

El Perchel is bordered to the north by La Trinidad, a district that since many centuries ago was relegated to the fishing industry and the periphery of the city to avoid the bad smells of fish; tradition that continued to exist throughout the different historical periods. 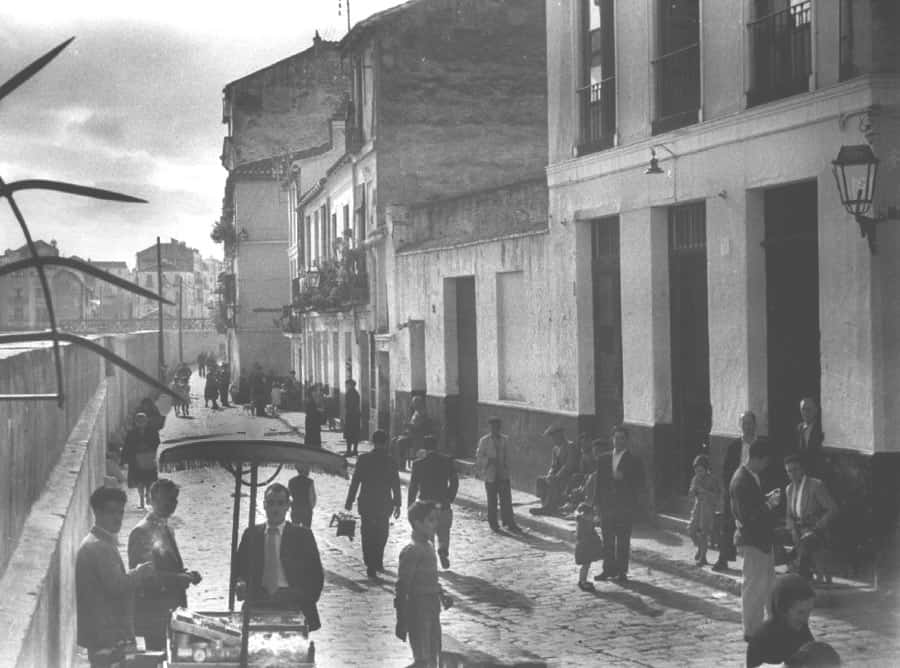 Perchel was already a known neighbourhood since the fifteenth century. They translated this neighbourhood as ‘Fish Market’ in the famous book of Cervantes ‘El Quijote’.

In this neighbourhood of Malaga you will find ‘El corralon de Santa Sofia’ and other traditional houses of neighbours that are still standing and you can visit.

Festival of the corralones houses in Malaga

During this week the neighbours invite us to a big party in their courtyards ‘patios’; all perfectly decorated for winning the prize. Winners will receive money that they must use to improve the patio for the next contest. This is a way of keeping these typical buildings in good conditions and to turn them into a tourist attraction. 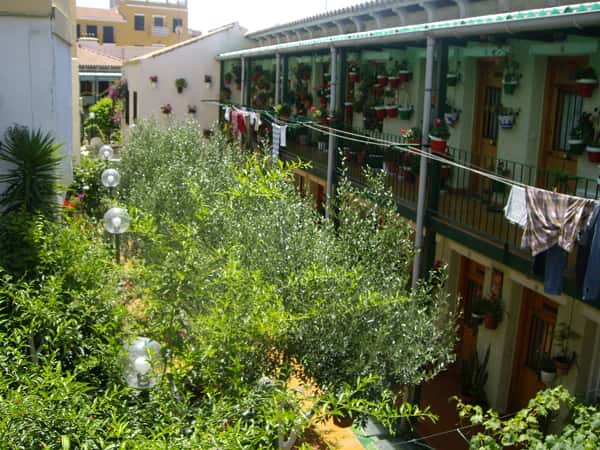 Previous winners used the prize for installing a central fountain, others dedicated it to improving the façade. There is no lack of typical geraniums adorning the corners and walls of these areas.

Some days they may offer typical tapas and a glass of wine. Each visit is a surprise, both for the decoration and for the possibility of tasting some local delights; snails in almond sauce and Malaga salad, others a good potato omelette…all made by the neighbours themselves.

Nothing is to envy the Cordoba patio festival, I recommend you to visit this event.

The event starts on Saturday 15 December at 11 am in the Santa Sofia corralon in Calle Montes de Oca, 6. (Perchel North). There will also be a Flamenco performance on Sunday 16 December at 8 pm.

A sample of typical gastronomy will be offered by the residents’ association from 18 to 21 December at 5.30 pm with traditional dishes and preparation of sweets.

On the 15th at midday there will be a special day dedicated to children and families at Plaza de San Pablo at midday and the 18th at 7 pm at Santa Sofia.

The closing gala will be on 20 December from 7 pm to 10 pm with a projection of the photographs of the participating patios and different performances.

Visitors who wish to book a guided tour should do so calling 951928944 or by email amrbenitez@malaga.eu