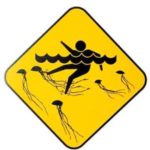 In summer, especially the hot days and usually in August, the presence of this annoying animal can ruin anyone day, so I think it is a good idea to talk a little about them and what to do when a jellyfish stings you.

Luckily in Malaga there is no presence of dangerous species of jellyfish for humans.

The called ‘Portuguese Caravel’, without being actually a jellyfish but acting as one, can be dangerous but it is actually very rare to see one in the Mediterranean sea.

The jellyfish, these gelatinous organisms are not particularly dangerous (at least the ones we have here), but their stings cause itching and stinging pain. Jellyfish do not attack, but move slowly, floating and they are drawn by the currents. Because they are highly translucent, they are relatively difficult to see in the water and therefore, sometimes bathers get accidentally in contact with them. This is when the cells of the tentacles release a poison, used for hunting or defence.

Sometimes the jellyfish will be on the sand or on the shore after being dragged by the water . Even after dead they are still dangerous. It is better to remove or bury them so that no one can be injured. 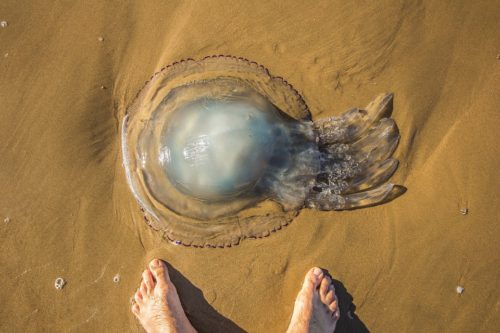 These “stings” produce instant pain and burning sensation radiating to the root of the affected limb, itching and edema (swelling). The intensity of symptoms varies depending on the affected area and can also have symptoms such as nausea, vomiting, diarrhea, muscle spasms or allergic reactions in some severe and very rare cases.

In the most popular beaches of Malaga there is usually a lifeguard station nearby. However, we leave you some useful tips on first aid. For example, on the beach where I go there are no lifeguards, and there the “regular swimmers” bring a little “first aid kit”, a folk remedy to relieve the sting of the jellyfish: A small bottle with ammonia or vinegar diluted to 50%. To me, it worked great!

Are there dangerous jellyfish in Malaga?

There are no dangerous native jellyfish in Malaga, although before the summer season the so-called ‘Portuguese Man-O-War’ may appear. It is advisable to inform yourself or ask the lifeguards about the safety of the bath before the middle of June.

The Portuguese Man-O-War may cause no more than severe pain after the sting, although in people who are weak, allergic to the toxin or young children, a more serious condition may appear. It is therefore recommended not to swim when the lifeguards say so or when there is a yellow flag on the beach.

Portuguese Man-O-War (Phisalia physalis) is not a jellyfish, but an association of different organisms specialized in defense, feeding and reproduction. Its most characteristic feature is a violet-shaded floating bag. Under this bag there are stinging tentacles that can reach several meters in length.

If there is danger in a bathing area, it is best to avoid the shore even if you cannot see it. The length of the tentacles and their powerful venom can affect even if the skin rubs against a small fragment.

Due to their reproductive cycle and marine currents they can appear on the Mediterranean coast during spring. As of June 15, there is usually no trace of them.

What to do when you’ve been stung by a jellyfish

Wash affected area with seawater. NEVER with freshwater because this activates the remaining nettle cells attached to the body.
Do not rub the area or touch with your hands.
Local application of ammonia or vinegar (diluted to 50%)
Remove the remaining fragments of tentacles attached to the skin (with gloves or tweezers) and reapply ammonia or vinegar. 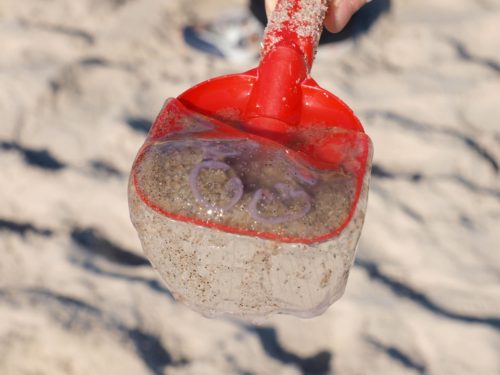 Some tips to avoid being jellyfish stings

Pay attention to the flags that indicate their presence. Do not bathe or walk barefoot on the shore if there are jellyfish on the beach.

Do not touch a dead jellyfish or its fragments. Be very careful because although the jellyfish is dead, it keeps releasing its venom, so you better don´t touch it.

If you remember, take a little bottle of vinegar in your “Beach Kit”. It may come in very handy for you, your children or a towel neighbour.

Are there jellyfish today?

You can check via app if there are medusas today in your favourite beach:

What do you do when you get stung by jellyfish? was last modified: May 3rd, 2022 by Raúl G.T
Comparte este artículo:

4 thoughts on “What do you do when you get stung by jellyfish?”