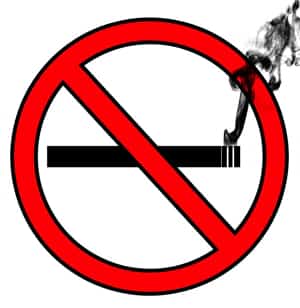 Tourists travelling to Spain might be interested to know about the smoking ban which came into operation in 2011. We know Spain so far as a quite permissive country; however the new smoking ban is one of the toughest in Europe.

This highly controversial action continues to raise heated discussions among non-smokers and smokers. There was resistance from the Hotel sector, restaurants and bars which alleged a  loss of customers.

Spain has become one of the countries with the toughest anti-tobacco laws. In addition to the law that avoids smoking in public spaces, taxes on cigarettes continue to rise every year.

Following the situation of the Covid-19, smoking is prohibited from August in all public spaces if a distance of at least 2 metres to other people cannot be guaranteed.

This means that you cannot smoke socially with other smokers, as the safety distance must be respected on a mandatory basis.

Some regions are banning smoking on the beach, in the case of Andalusia so far and in the absence of other news, it is allowed as long as the distance to another person is 2 meters or more.

Fines for breaking this law start at 100 Euros, depending on how many people are put at risk.

So can you smoke in Spain?

Smoking is prohibited in enclosed public spaces such as bars, restaurants, nightclubs, casinos, airports and outdoor spaces such as playgrounds, schools and hospital grounds. The hotels are equipped to book 30% of their rooms for smokers.

Smoking on the terraces is allowed; the Costa del Sol has a great advantage, as the mild climate all year round allows you to enjoy a drink on a terrace without being cold.

Smoking tourism in Spain or not?

Smoking is now banned from closed public spaces such as bars, restaurants, nightclubs, casinos, airports and outdoor spaces like children playgrounds, school and hospital grounds. Hotels are enabled to reserve 30% of their rooms for smokers. Smoking on terraces is still allowed. In this respect, the Costa del Sol has a huge advantage, as the mild weather throughout the year permits to enjoy a drink in a terrace without getting cold.

According to an international survey by a flight search engine, 45% of smoking tourists would be less willing to travel to Spain for holidays, meanwhile a 61% of non smokers stated that they would be more likely to choose Spain for their holidays and to be comfortable in bars and restaurants without being bothered by the smoke.

Furthermore, 38% of smoking tourists informed that the new law would not influence their decision to travel to Spain, although they would have to accept not being able to smoke indoors. The terraces equipped to smoke can be a good solution for them. And another 13% of respondents, smokers and nonsmokers, responded that the new law does not bother them and, of course, will not affect their decision to travel to Spain.

Smoking in discos, bars or restaurants

At present, smoking is not allowed in enclosed public spaces. This includes discos, bars and restaurants.

Many smokers choose to sit on the terrace of the bar or restaurant to be able to smoke before and after meals or to have a drink.

In the discotheques it is more complicated now if you are a smoker, you will have to go out to the entrance of the discotheques to smoke. Before the ban, going to a discotheque meant returning home with the smell of tobacco permeating clothes and hair, so both smokers and non-smokers benefit from the new situation.

Although many airports have smoking areas, this is not the case at Malaga airport. Once you’ve passed the security checkpoint, say goodbye to your cigarettes.

Many smokers choose to stay as long as possible outside the airport before passing through security checkpoint. If you are one of them, be careful not to miss the flight; the security check is usually quick, but in high season it may take longer than desired to get through.

What do you think about this controversial law?

What should you take in consideration when smoking in Spain after the ban? was last modified: September 15th, 2020 by Raúl G.T
Comparte este artículo:

17 thoughts on “What should you take in consideration when smoking in Spain after the ban?”