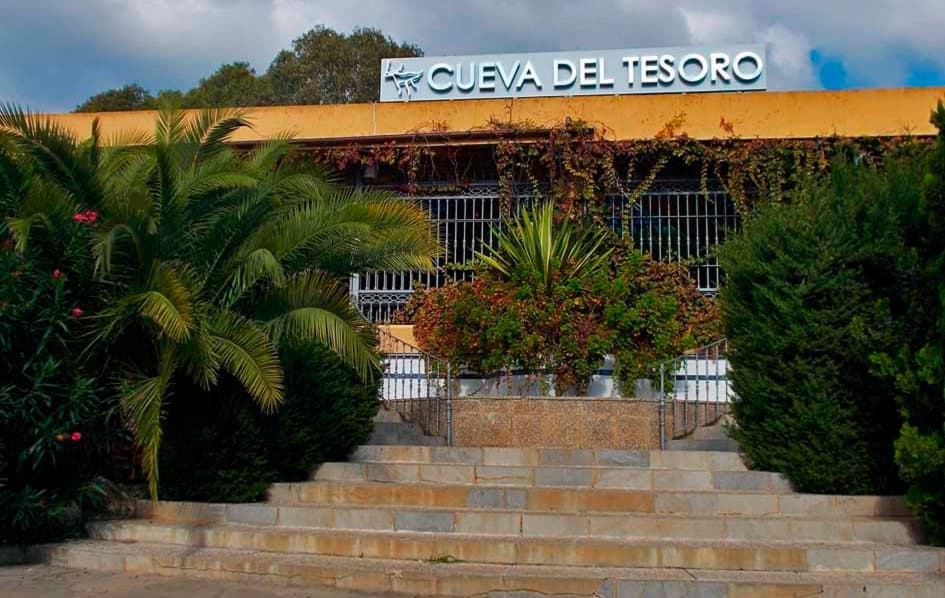 Cueva del Tesoro in Rincon de la Victoria (Malaga) is the only underwater cave in Europe and one of the three known around the world. As you can see it is an exclusive place, so I’m going to tell you some curiosities and facts about this cave. If you dare to visit it, here we go. 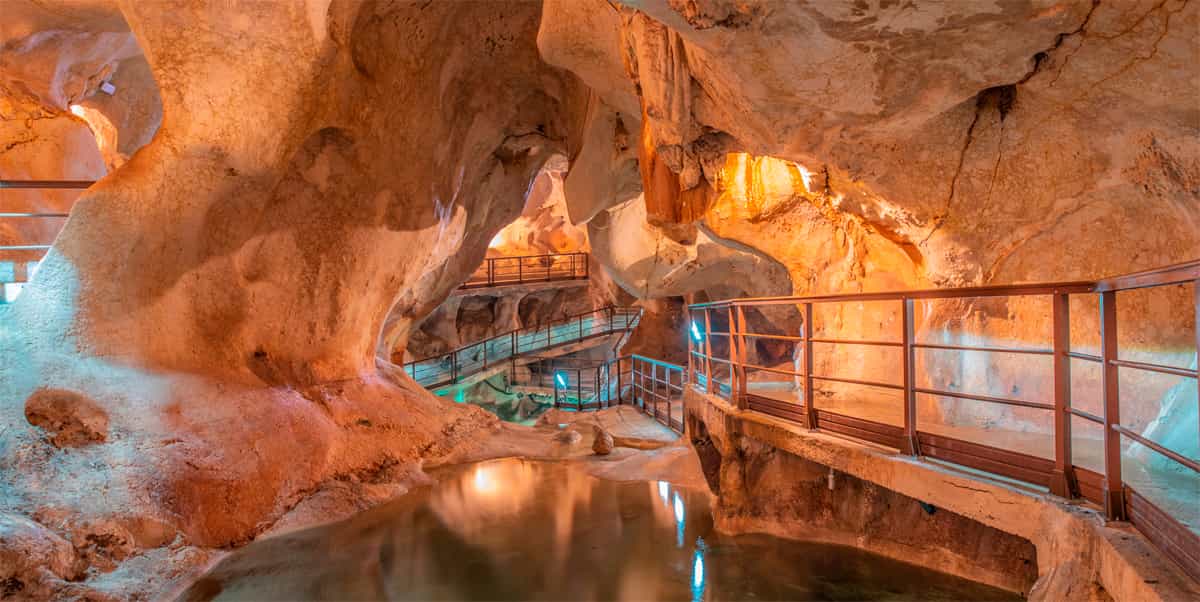 If you are looking for the “Musical November” event, just follow the link to read information about the International Festival of the Cave. The information is at the bottom of this article.

The formation of this cave probably did happen during the Jurassic period. It is a limestone cave that emerged from the sea over the time in different stages. This evolution in stages and the infiltrations of fresh water produced a curious mixture of formations that happen both in underwater and terrestrial caves.

The cave paintings and archaeological remains found show human activity in the cave throughout history. It has also been a place of ritual and sacrifices.

Every year is celebrated the International Music Festival in the cave.

Why is it called the Treasure Cave?

The oldest name associated with the place is Cueva del Higueron; however its name changed over time as you will read below.

According to the ancient legend, a royal treasure destined to Al-Andalus was lost by the 12th century. Several writers situate the treasure into the cave, although we do not know the reason behind it.

A local researcher during the 18th century deduced from the Greek historian Plutarch that Marco Crassus used this cave for 8 months as a hiding place after escaping from Rome during the year 86 BC. (Plutarch Lives: Life of Crassus) 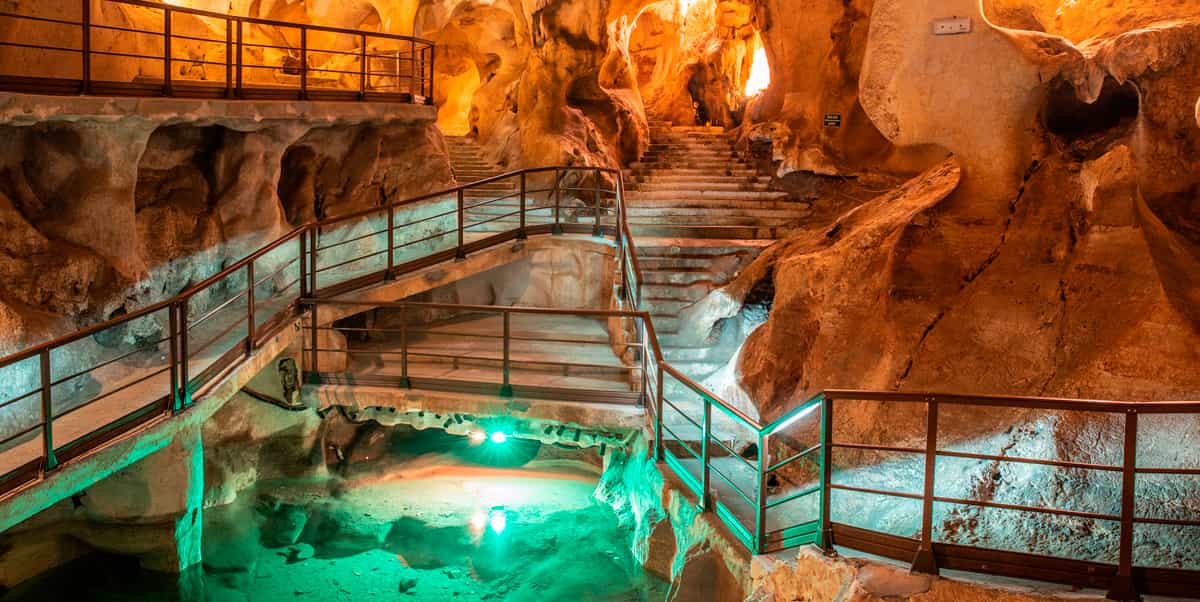 Legend of the Treasure Cave

Legends never die but grow over the years, and that is what happened with this place. The visit of a Swiss adventurer added the tragic element with which every good story needs to endure in time.

Antonio de la Nari, Swiss by birth, spent almost 30 years searching for the legendary treasure; he had no doubts about its existence. He used dynamite to open new galleries and passageways, something that would end in disaster. During 1847 the legend of the treasure defeated him, dying because of one of the explosions. Perhaps he left after having found the true treasure of the cave, to be part of its legend; the cave would later be known as the “Cave of the Swiss”.

The land belonging to the cave would be acquired at the beginning of the 20th century by a pharmacist with the intention of collecting herbs for his remedies. Over the years he sold the cave for the symbolic price of 1 peseta to his son Manuel, who with an adventurous aspiration dedicated his weekends to investigate the legend.

Manuel found a candle with 6 Arab gold coins in the Virgin’s Hall, in an area containing soil that apparently was removed; a place where a humanoid shadow with hat and cape would appear several times, a figure popularly recognised later as Shadow People. This led him to suspect that there might be some truth behind the legend, perhaps the treasure was buried there?

During his research he finds Prehistoric remains, ceramics and some animal bones such as the fossilized bone of a bison.

Until well into the 19th century there was a great fever in Andalusia for ancient and hidden treasures. It was said that the Arabs, on their escape, buried the treasures with the hope of recovering them on their return, who knows whether by themselves or through their descendants.

There are many legends and some of them seem to be true. They are about people who disappear overnight, leaving behind a halo of mystery or the trace of a possible treasure. It is quite possible that the cave was one of the targets of those treasure hunters, more considering the legend it hosted for centuries. Who knows if any fortunate person managed to find such a precious trophy, as those who seemed to find one often vanished in silence; in those days having a great richness from one day to another was surely very dangerous.

If finally someone found the treasure nobody knows. Perhaps it does not exist and it is better to let it remain part of the charm of this cave, its legend.

You can visit throughout the year the different halls of the Treasure Cave:

The Cueva del Tesoro has winter and summer opening hours. It is a recommended visit for families.

Audio-guide for the visits.

Update 2020: The free-of-charge admission to the Cueva del Tesoro has been modified because of the covid 19. Access early in the morning for the first 25 people, with previous reservation through the web.

More information about prices and about the Cueva del Tesoro on the official website: https://www.turismoenrincon.es/en/cueva-del-tesoro/

This year the Musical November will take place in the Casa Fuerte Bezmiliana (Map) every Friday of the month from November 8.

The leading role will be classical music. There will be 3 string and wind concerts and one by the Rincón de la Victoria Municipal Band.

Remember that all concerts are free until full capacity is reached and will start at 8.30 pm every Friday. (https://www.turismoenrincon.es/en/here-comes-noviembre-musical-live-classical-music/)

The Cueva del Tesoro (Treasure Cave) is in Rincón de la Victoria. You can get there by car via the A-7 road. There is a free parking.

If you plan to visit us you may be interested in renting a car in Malaga. Another option is a round transfer from your accommodation to the Cueva del Tesoro, for which I can recommend malagatransfer.co.uk; you can also have a look at the websites that offer transfers in Málaga.