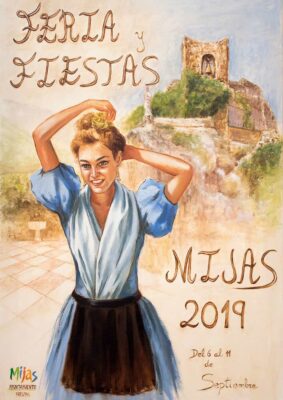 The popular Mijas Fair takes place during the first half of September. In this charming village located about 400 metres above sea level there is a wide cultural programme. There will be activities for all tastes and ages during these holidays.

On the first day of the fair, the traditional cavalcade with big heads will parade through the main streets of the town. The day fair is taking place next to the wall where there will be popular activities and games for children as well as musical performances and fireworks.

Activities during the fair in Mijas Pueblo

Among the activities there are evening musical performances, a bike ride through the village, a horse rally, a children’s festival or popular games on the Wall, a skeet shooting competition and a huge paella among many other activities.

There is also a fairground on Avenida de Mexico. You’ll find the typical fairground mechanical attractions.

As every year, the queen and king of the fair will be chosen, both for adults and children.

If you want to visit Mijas, I recommend you take a look at our guide.

The youth booth will have DJs with fashionable music from 10 pm to 5 am.

Children’s Day, all attractions are priced at 2 €.

The Youth Booth organizes its own opening party until late.

Themed party in the Youth Booth with music group and DJ performance until late.

Themed party in the Youth Booth with music group and DJ performance until late.

Themed party in the Youth Booth with gifts for the attendees.

Closing party at the Youth Booth with DJ until late.

How to get to Mijas Pueblo

By bus: From the bus station in Fuengirola buses leave every 25 minutes to Mijas Pueblo.

You can also take a taxi to Mijas Pueblo, check the link for more information.  Personally I recommend the service of Malagatransfer.co.uk, I have used it and the experience has been good, plus you can have fun without worrying about having to drive later.

Fair of Mijas Pueblo during the first half of September was last modified: February 7th, 2020 by Raúl G.T
Comparte este artículo: