Check below a video with a plane taking off Gibraltar airport.

The length of the runway of the airport is of 1,829 m in length. The funny thing is that the track crosses the road in the town, so when a plane is about to land completely stop traffic so no problems.

Gibraltar airport was built during World War II and opened in 1949 but only was used as an emergency basis for the British Army. It was not until December 2, 1987 when the Gibraltar airport was allowed to use civil transport through an agreement between British and Spanish governments.

The length of the runway of the airport is of 1,829 metres. The funny thing is that all vehicle and pedestrian traffic to the town has to cross the runway, so when a plane is about to land or take off, traffic gets completely stopped in order to cause no problems. A new agreement was signed in Cordoba between the two countries and the authorities in Gibraltar in 2006 for ending restrictions on civil use of the airport, with flights also to and from Spain; the first airplane to land in Gibraltar was Iberia from Madrid - Barajas Airport on 16th of December 2006. Since May 2007 British Airways, through its franchise partner GB Airways flies daily to both cities (Madrid - Gibraltar), but these flights were not popular. 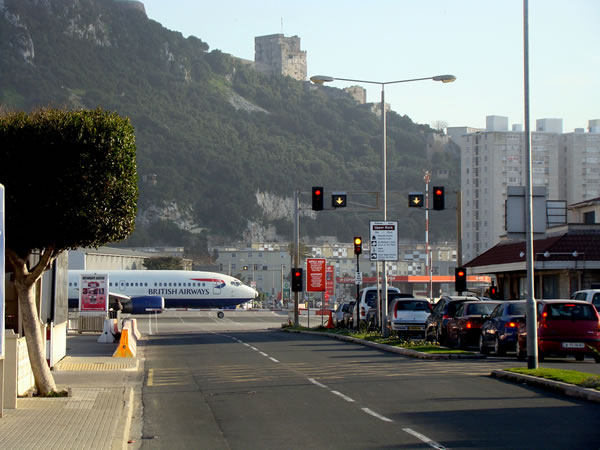 The Gibraltar Government announced it would build a new passenger terminal as part of the agreements of the Forum of Dialogue on Gibraltar. The essence of the agreement is to build a terminal which connects with an extension to the Spanish territory.

At present are available daily scheduled services to and from the United Kingdom operated by British Airways, Monarch Airlines and Easyjet. The company Air Andalus offers a service to Spain.

Gibraltar airport boosts an open air roof terrace with a Café from where you can overlook the planes.

If you are looking for transport from and to Gibraltar airport, take in consideration the tips below: