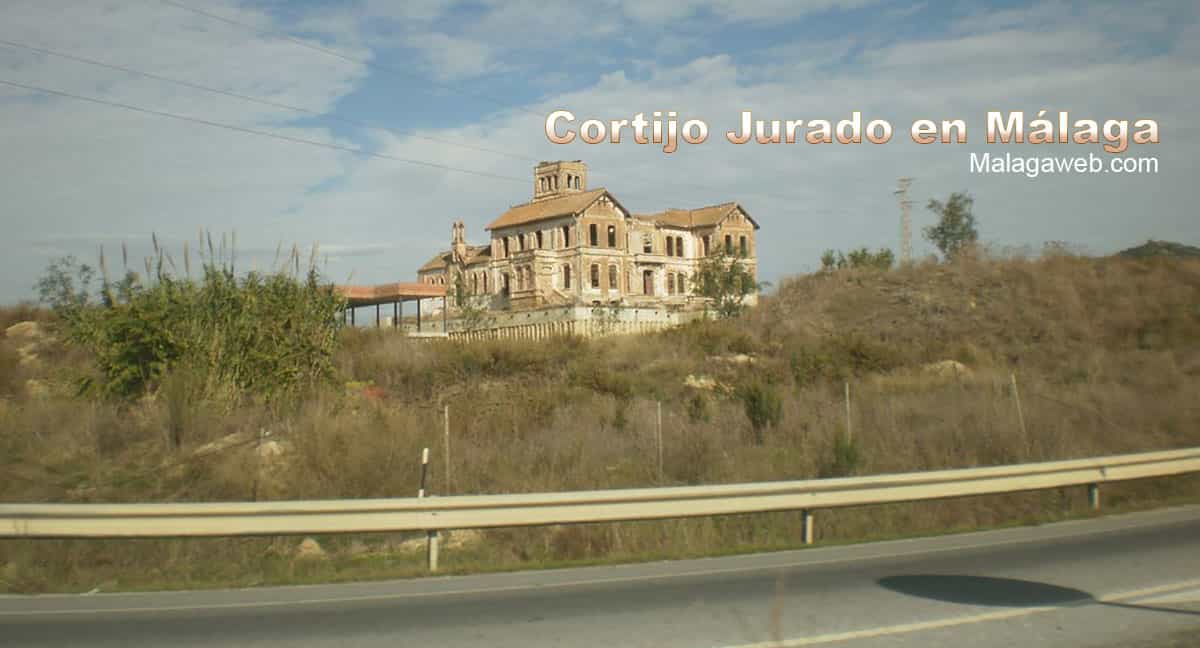 Halloween is coming soon, and due to the success of the previous entry about mystery stories in Malaga, I have decided to add a second part. Let’s talk about Cortijo Jurado, a mid-19th century hacienda and a very popular haunted house in Malaga.

It is located in Campanillas, a district on the outskirts of Malaga, a building that hides mystery behind its walls. This place has been the protagonist of legends for as long as I can remember. Appearing also in the most important mystery shows in Spain, such as Cuarto Milenio directed by Iker Jimenez.

Iker Jimenez once said, “The legend is sometimes the only symbolic way to tell a truth that is transmitted in time”. What truth would be behind all this legend?

Majestic on a hill rise the ruins of the Cortijo Jurado. What once housed the lives of two of Malaga’s wealthiest families is now part of a mysterious picture. Multitude of people drive every day in front of the house, which is located in front of a busy road; I don’t know how many of them get their sight lost onto it. I wonder about its mysteries, forgotten or perhaps buried by a voracious time, which leaves nothing intact in its wake.

Years ago the scenery was different, the essence of the place has undoubtedly marked the area. We are in front of a picture where the figure of the farmhouse shines with an unexpected intensity over the rest of the landscape. It invites us to know a little more about its past, to inquire about the facts as if trying to unravel the truth hidden behind the whole legend.

Of the exact year of its construction we know little, the documents that could attest it disappeared devoured by the insatiable time course. Popular memory tells us that it was built between 1830 and 1840 by one of Malaga’s wealthiest families, the Heredia.

Fortune would not always smile at the Heredia family. They arrived from La Rioja and were able to build their future in Malaga; due to economic pressure they sold the property to the Larios, another of Malaga’s wealthy families, in 1925. The Heredia family and Larios maintained a close friendship both personally and in business; both came from the same region in La Rioja. They were part of the high bourgeoisie of the province; the latter had another country house just 2 kilometres from this one.

Furthermore, after the Larios, the Quesada family bought the property. Later in 1952 a doctor from Valladolid became the new owner, who thanks to his good wealth was able to become part of the history of this farmhouse, although he never lived there.

Finally, the last occupants of this farmhouse were the Vega Jurado family, who acquired it in 1975 and from where the name ‘Cortijo Jurado’ originates. In 2000 a company acquired it for building a luxury hotel but they never finished the works, providing with new legends to the Cortijo Jurado. I remember hearing in class stories about the paranormal experiences of the workers or of curious people who fell into deep holes in the ground; it was gossiping I guess as I never read anything official about it.

Why is it a haunted house? Legends and Disappearances

The legend begins after the death of the patriarch of the Heredia family. With the new inheritors of the property, young girls began to disappear in the surrounding area between 1890 and 1920; they were supposed to die after suffering supposed humiliations and rituals of a satanic nature. Some of the young bodies were later found along the shores of the Campanillas River, not far from the farmhouse.

The focus was on the Heredia family, who were supposed to import satanic practices because of their friendships in France and England. They suspected that the victims were transported through secret tunnels and that in the underground of the farmhouse there were hidden torture machines, perhaps used in the past by the Inquisition.

Origin of the legend

The origin of the legend comes from some of the workers of the property and later from Manuel Martín; a young man who in 1942, as an act of courage in front of his friends, got into one of the tunnels. The cortijo was inhabited by seasons at that time; it was already surrounded with dark legends arisen from some who worked there.

According to what the young man told after his furtive incursion, he found a room with torture machines and scattered bones. Out of fear he ran away in a panic he never felt again; it was a moment that has always frozen his blood when remembering it. This boy has kept the same testimony over the years, according to neighbours and researchers who have known him.

At that time no one believed the 18-year-old and thought he had been a victim of the black legend of the farmhouse; a young man scared by the dark stories of the place that were being told?

Underground passageways of the Cortijo Jurado

It is a reality that the building has basements and passageways that possibly connect with the nearby Cortijo de Colmenares; the current Guadalhorce Golf Club and former residence of the Larios built in the 18th century.

Quite a few bourgeois haciendas had tunnels that connected them together. In fact, I have had the opportunity to see old UK haciendas with complex underground labyrinths with the remains of satanic rituals; a practice apparently more common than we believe among the upper bourgeoisie of the time.

Some legends evolve with real or fake events, this happens with Cortijo Jurado, we do not know to what extent it is true. Story says that during the work on the Cortijo Colmenares the earth did swallow a heavy truck. After this fact they quickly did cover the excavation with concrete; who knows whether to avoid staining the names of such illustrious figures of Malaga’s history or just to avoid the works taking too long.

What’s true about this legend? The truth is that the underground passageways exist and are accessible from the stall of the farm itself; there is visual evidence of this. Unfortunately for those who adventure inside they will find a concrete wall, impossible to cross even with a pick. It seems that the owners of the farmhouse around 1950 closed it, burying behind these thick walls part of the mystery of the farmhouse.

In the book I quote at the end of this article, the writer investigates and seems to find clues, but in the end he does not present any palpable proof. It is the reader who finally must form his or her own opinion.

A Haunted house in Malaga with paranormal events

To make matters worse, we must add to the legend the number of paranormal events that have taken place in this haunted house in Malaga. There are countless electronic voice recordings in which you can hear enigmatic voices without a certain origin. Not infrequently these voices with crystalline clarity seem to communicate with those who are there.

There are testimonies about a figure materializing on the courtyard; area where according to the same voices there are bodies several meters under the ground.

There is no lack of those who claim witness a figure appearing in one of the towers of the farmhouse.

In 2000 Jorge Rivera tried to shoot a short film about Lovecraft in Cortijo Jurado. Accidents, fires and other misfortunes in the end made it impossible for the film to see the light.

After the filming one of the actors fell through the hollow of an elevator, later after he was released from the hospital he disappeared and no one heard from him again. During the shooting the batteries of the equipment were discharging most of the time.

Problems with the hard drives and damaged images made them finally to give up, contributing to the legend of this haunted house in Malaga.

Not many people know that it housed a hospital and a prison in its basement. Many people lost their lives here executed during the Civil War.

I leave a lot of information, also the family history is very interesting. Maybe for a future update or for the next Halloween.

For those who are able to read Spanish and want to delve deeper into the subject I recommend this book. It contains a complete investigation of the Cortijo Jurado, stories, paranormal events and even a visit to the Cortijo Colmenares looking for the clues of the underground tunnels.

I’m linking the translated version, copy the text and don’t click the link if you can read Spanish:

Do you think it is a real haunted house in Malaga or just a made up of legends and casualities?