Yes, exactly as you read it! But at least you’ve been warned! If not, you might just be strolling the streets of Malaga in the placid evening of May 5th and suddenly … you run into the most terrifying elite troops that ever existed, the army of clones of the Legion 501, the dreaded Storm troopers of Star Wars! 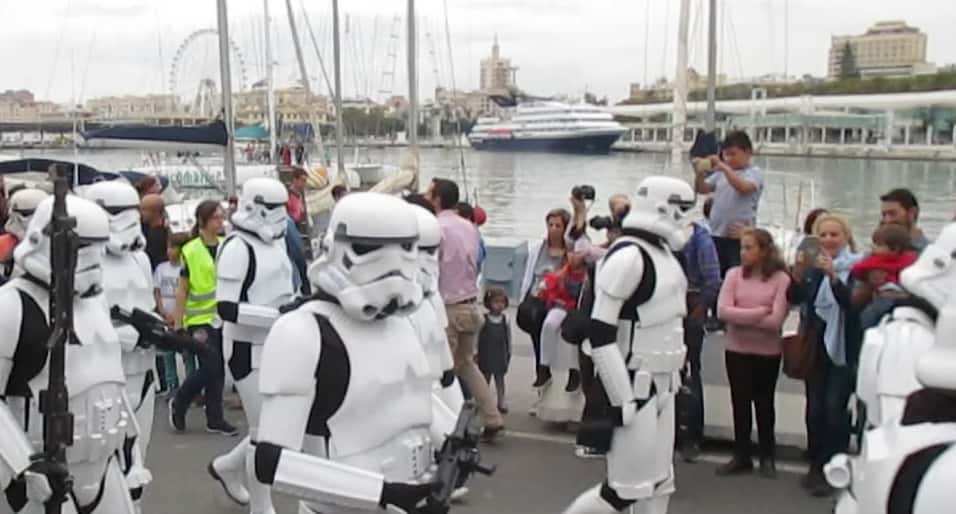 You can either flee and save your miserable life or bravely face with your camera the troops of the Empire, Siths and Darth Vader himself invading the streets of the historic centre of Malaga.

All about Star Wars parade in Malaga

What is it about?

If you are this day in Malaga or you fancy getting some photos with the Dark side of the Force. We explain a bit more if you´ve become curious.

The “original” Legion 501 was a group of elite clone troopers in the service of the Dark Side; the “current” Legion 501 is an international organization of Star Wars costumes comprised of and operated by fans of the series. Although it was created in 1997 in the United States it extended worldwide. It is a non-profit organization that works with organizations and foundations to help children and needy in charity events. In fact they are known as ‘the bad guys who do good deeds’. They officially belong to the Star Wars universe and are recognized by George Lucas, who is also an honorary member of the Legion.

In the Legion 501 there is also the “Spanish Garrison,” displaying all their fearsome power in Malaga and along Spain in the so called Training Day. The parade will last for about 3 hours.

Feel like learning more about the world of the popular ‘Star Wars’ saga? You can attend a collection exhibition from April 27th to May 27th in Malaga.

The exhibition is located in the Palmeral de las Sorpresas, next to the Port of Malaga. There will be all kinds of items for the fans. You’ll find an original Darth Vader helmet signed by the actor, original storyboards, life-size figures, dioramas and much more.

It is a very special exhibition because of the few units that exist all over the world. If you’re a Star Wars fan and you’re in Malaga you shouldn’t miss it.

The ticket price is 6€ per person per day.

You can buy tickets or see more information on the official website:

Are you ready to face the Dark Side? May the Force be with you!

Latest posts by Raúl G.T (see all)
Imperial Troops invade the streets of Malaga in May! was last modified: February 7th, 2020 by
Share this article: